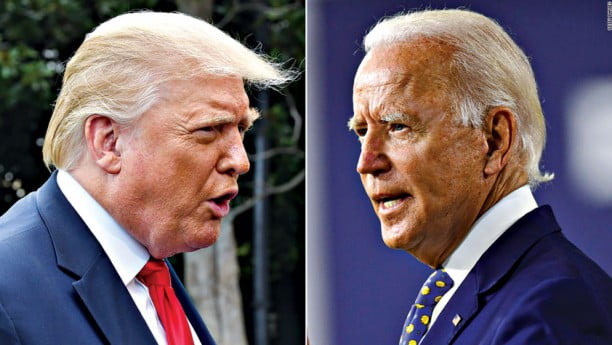 Signaling a potential record turnout, more than 50 million Americans have cast ballots in the presidential election. According to Michael McDonald of the University of Florida’s Elections Project, at least 51 million people had cast ballots in person or by mail till Friday.

That is roughly 21% of all eligible US voters. Some 137 million ballots were cast in the 2016 election, and McDonald and other experts predict that figure could be above 150 million this year.

Trump, a Republican, adopted a more restrained tone than he did during a chaotic first debate in September, when he repeatedly interrupted Biden. But Thursday’s clash still featured plenty of personal attacks between two men.

The absence of disruptions yielded a more substantive debate over a range of topics including the economy, race, climate change, healthcare and immigration. But the coronavirus, which has killed more than 221,000 people in the United States, loomed over the proceedings as it has throughout the campaign.

The televised encounter in Nashville, Tennessee, represented one of Trump’s last remaining opportunities to reshape a race that national opinion polls show he has been losing for months, though the contest is much tighter in some battleground states likely to decide the election.

“Anyone who’s responsible for that many deaths should not remain president of the United States of America,” Biden said.

Trump, who has put his stewardship of the economy at the center of his campaign, defended his approach to the outbreak and said the country could not afford to close businesses again despite fresh surges.

“We’re learning to live with it,” said Trump, who has played down the virus for months. “We have no choice.”

“Learning to live with it?” Biden retorted. “Come on. We’re dying with it.”

In a reminder of the Covid-19’s accelerated spread as winter approaches, researchers at the University of Washington’s Institute for Health Metrics and Evaluation warned the virus could kill more than half a million people in the United States by the end of February 2021.

Trump, whose instinct remains to run as an outsider, portrayed Biden as a career politician whose nearly 50-year record was insubstantial.

After an opening segment on the pandemic, Thursday’s clash pivoted to rapid-fire exchanges over whether either candidate had improper foreign entanglements. Trump repeated his accusations that Biden and his son Hunter engaged in unethical practices in China and Ukraine. No evidence has been verified to support the allegations, and Biden called them false.

Biden defended his family and said unequivocally that he had never made “a single penny” from a foreign country, before pivoting to accuse Trump of trying to distract Americans.

He instead accused Trump of avoiding paying taxes. Trump, who has broken with decades of presidential precedents in refusing to release his tax returns, said he had paid “millions.” He again said he would release his returns only once a longstanding audit was completed.

The candidates argued over foreign policy, immigration and – after months of anti-racism protests – race relations, with Biden saying Trump was “one of the most racist presidents” in history.

“He pours fuel on every single racist fire,” Biden said. “This guy has a dog whistle as big as a foghorn.”

Trump responded by criticizing Biden’s authorship of a 1994 crime bill that increased incarceration of minority defendants while asserting that he had done more for Black Americans than any president with the “possible” exception of Abraham Lincoln during the US Civil War in the 1860s.

During a segment on climate change, Biden said his environmental plan would “transition from the oil industry” in favor of renewable energy sources, prompting Trump to go on the attack.

TRUMP TO VOTE TODAY IN FLORIDA

A day after the debate, Trump and Biden are scheduled to return to campaign trail. Trump, 74, will hold two rallies in the battleground state of Florida, where opinion polls show a tight race. Biden, 77, will deliver a speech in his home state of Delaware on his plans for leading a recovery from the pandemic.

Former President Barack Obama, with whom Biden served as vice president for eight years, will campaign in Florida on Saturday. Obama made his campaign-trail debut for Biden in Pennsylvania on Wednesday.

Biden entered the final days of the race with more cash than Trump. The Democrat raised about $130 million during the Oct. 1-14 period, about three times the roughly $44 million raised by Trump’s campaign.