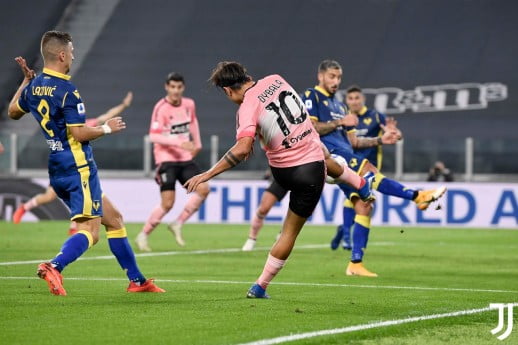 Juventus substitute Dejan Kulusevski rescued a point for the stuttering champions at home to Verona as they were held to another 1-1 draw in Serie A on Sunday.

Andrea Favilli produced a remarkable six-minute cameo for the visitors when he came on in the 55th minute, put Verona ahead five minutes later and then went off injured.

Juve, still missing Cristiano Ronaldo who was isolating after testing positive for COVID-19, levelled with a solo goal by Kulusevski in the 78th minute.

The Turin side, who drew their previous league game 1-1 at Crotone, are fifth with nine points after five games, three behind leaders AC Milan who host AS Roma on Monday.

They have won only once on the pitch and drawn three times while their other game was a 3-0 walkover against Napoli who failed to play due to confusion over COVID-19 rules.

Juve are clearly still at an experimental stage under coach Andrea Pirlo, who is in his first senior coaching job, and Verona were the more dangerous side for the first hour.

However, Kulusevski brought them to life and they laid siege to the Verona goal in the closing stages.

The visitors sounded an early warning when Ebrima Colley had the ball in the net but it was disallowed for offside.

Juan Cuadrado rifled a shot against the bar for Juventus three minutes before halftime and Alvaro Morata had a goal disallowed for offside after a long delay and VAR review.

Verona continued to threaten after halftime and it was no surprise when they went ahead on the hour, Favilli sweeping the ball home from Mattia Zaccagni’s incisive pass.

Juve burst into life and struck the bar for a second time with a curling effort by Paulo Dybala before Kulusevski levelled. The Swede received the ball on the right, twisted past his marker and scored with a low shot into the corner.

Verona goalkeeper Marco Silvestre then denied Dybala, Morata and Cuadrado in stoppage time as Juventus launched a full-scale offensive on the opposition goal.