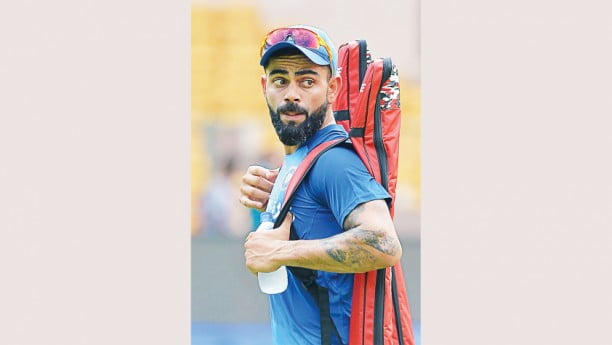 India captain Virat Kohli has been granted “paternity leave” to miss three of the country’s four Tests in Australia starting in December.

But the Board of Control for Cricket in India also announced Monday that another key batsman, Rohit Sharma, has been added back to the Test squad despite his injury worries.

Kohli, 32, and his Bollywood actress wife Anushka Sharma are expecting their first child in January and the team captain has been given special dispensation to be present.

India leave for Australia this week and the BCCI said Kohli told them in October that he would return after the first Test ends in Adelaide on December 21. “The BCCI has granted paternity leave to the Indian captain,” said a board statement which also confirmed his return date.

That means the world’s top ranked one-day batsman will lead India in the three one-day internationals, three Twenty20 matches in November and December and the opening Test, a day-night fixture starting December 17.

The second Test starts in Melbourne on December 26 followed by matches in Sydney and Brisbane in strict bio-bubbles during the pandemic crisis.

Sharma, who picked up a hamstring injury in the Indian Premier League, will start late, despite taking part for defending champions Mumbai Indians in Tuesday’s final against Delhi Capitals.

The board said a medical team had been monitoring the 33-year-old opener and “it has been decided to rest him for the ODIs and T20Is in Australia to regain full fitness” before taking part in the Tests.

Veteran fast bowler Ishant Sharma will also be added to the Test team after he regains full fitness from a muscle tear that made him miss a large part of the IPL with Delhi.

India, who won their first ever series in Australia on their last tour, will leave on Thursday to undergo a two-week quarantine before the first ODI on November 27 in Sydney.