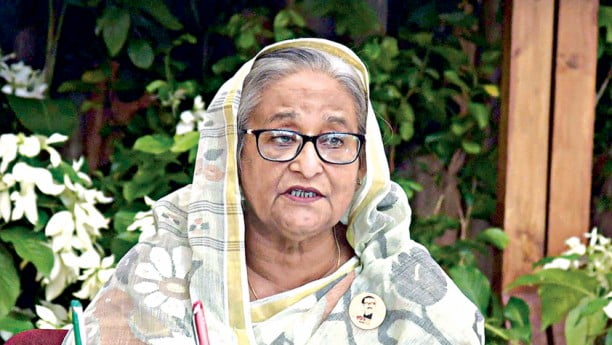 Prime Minister Sheikh Hasina yesterday asked all concerned to highlight the facts of any incident alongside protesting the spread of rumours and false propaganda in the name of freedom of speech.

“Spreading false propaganda is not freedom of speech…there should be immediate protests against any false propaganda…. People must know the facts. Sitting silent will not help,” she said.

The PM was speaking at the weekly meeting of the cabinet at the Bangladesh Secretariat. She chaired the meeting from the Gono Bhaban through videoconferencing.

Hasina said there might be some pain in telling the truth of any incident, but ultimately it would surely work.

The PM said a vested quarter is accustomed to making ill-efforts to cause harm to the people and the government of Bangladesh. She called upon all to remain aware of that quarter.

She said a section of people was trying to spread rumours to undermine the government’s image, but they can never succeed in fulfilling their ill motives.

The PM said it cannot be accepted in this era of digital media that one would write and publish whatever he or she wants to in the name of freedom of speech.

“In social media, anyone can say whatever they like…one can spread false propaganda. Whenever the government takes any step against those, vested quarters make a hue and cry and spread various arguments across the world.”

Hasina said people usually do not look into why the step has been taken.

It is also essential for the authorities concerned to provide facts and information about an incident with necessary explanations, she added.

The prime minister said the mentality of taking a defensive stance without giving appropriate information is not good at all.

Referring to the spread of a rumour during the students’ movement against the quota system in government jobs, Hasina said general students agitated following a rumour that a girl was being tortured at the Awami League’s Dhanmondi office.

She said incidents like attacking the party office with stones and lethal weapons also happened during that time due to the spread of false information by a group of conspirators.

“And such incidents took place when Bangladesh reached a better position on economic indices proving the negative predictions of various international organisations wrong.”

Hasina said there were vested groups, both at home and abroad, who did not like the progress of the country.

Bangladesh would continue to move forward in future, she added.