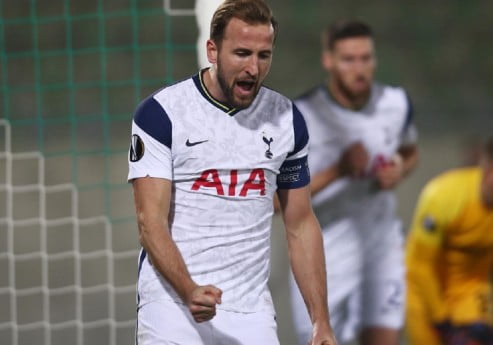 Harry Kane scored his 200th goal for Tottenham Hotspur on Thursday as he helped fire Spurs to a 3-1 Europa League win at Ludogorets, while 10-man Benfica came back from two goals down to snatch a last-gap 3-3 draw with Rangers.

England captain Kane opened the scoring for Jose Mourinho’s side with just 12 minutes on the clock when he headed home Lucas Moura’s corner to bring up his double century of Tottenham goals in his 300th match for the club.

Kane then turned provider for Moura in the 32nd minute when he flashed a perfect low cross for the Brazilian to tap home before being substituted at half-time.

Claudiu Keseru pulled one back for the Bulgarians five minutes after the break but Giovani Lo Celso made sure of the win to draw Spurs level on six points with Group J leaders Royal Antwerp ahead of their match with LASK later on Thursday.

Rangers were poised to make it three wins from three in Group D thanks to an Diogo Goncalves own goal and further strikes from Glen Kamara and Alfredo Morelos which put Steven Gerrard’s side 3-1 ahead.

But despite losing Nicolas Otamendi to a straight red card with less than 20 minutes gone, two-time European champions Benfica fought back and in added time levelled when Darwin Nunez raced through and slotted home past Allan McGregor.

The pair are joined on seven points at the top of the group, four ahead of Lech Poznon who beat bottom side Standard Liege 3-1 to leave the Belgians pointless.

Qarabag lost 2-0 at Sivasspor to remain rooted to the bottom of Group I a day after their media manager was suspended by UEFA for reportedly calling for the killing of “all the Armenians, old and young, without distinction”.

The social media post in question came amid the conflict between Azerbaijan and Armenia in Nagorno-Karabakh, where Qarabag were founded and based until Armenia’s takeover of the region in 1993, forcing the club to relocate to Baku.

Roma took control of Group A with a thumping 5-0 win over Cluj that put them three points clear of the Romanians ahead of the later match between Young Boys and CSKA Sofia.

Paulo Fonseca’s side are top on seven points after a powerful display from a second string line that started without Edin Dzeko, Pedro and Chris Smalling which did for a Cluj side shocked by coach Dan Petrescu’s decision that the match would be his last in charge.

Henrikh Mkhitaryan gave the Serie A side the lead just 57 seconds after kick off, and Ibanez, a brace from Borja Mayoral — his first goals since signing on loan from Real Madrid — and another strike from Pedro sealed the points.

La Liga leaders Sociedad are also on six points after beating Alkmaar 1-0, leaving the group on a knife edge with three matches remaining.

In Group E, PAOK Thessaloniki boosted their chances of qualifying for the knockout rounds by thumping PSV Eindhoven 4-1, while Granada are top following their 2-0 win over Cyprus’ Omonoia.