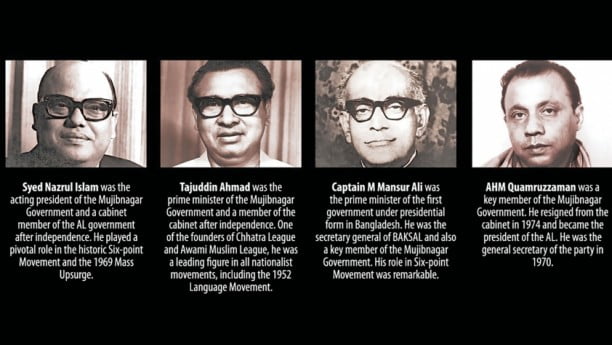 It has been 45 years since, on this very day in 1975, four national leaders were assassinated at the Dhaka Central Jail.

It has also been more than 16 years since a trial court handed down punishment to the perpetrators of the heinous crime.

But justice still eludes the nation as the government could implement the verdict of only one, Captain Abdul Majed, of the 11 convicted killers of the four national leaders — Syed Nazrul Islam, Tajuddin Ahmad, AHM Quamruzzaman and M Mansur Ali.

Majed, who was sentenced to life imprisonment in the jail killing case, was arrested on April 7 this year after decades of absconding. Four days after his arrest, Majed, also a convicted killer of Bangabandhu Sheikh Mujibur Rahman, was executed in connection with Bangabandhu murder case.

Other than Majed, the progress has not been satisfactory.

It is believed that all the convicts are hiding abroad, and the government has so far traced the whereabouts of only two — Rashed Chowdhury in the USA and Noor Chowdhury in Canada — but has failed to bring them back due to some legal tangles.

Against this backdrop, the nation is observing the 45th anniversary of the Jail Killing Day today to mourn the four leading figures of the Liberation War.

According to the first information, five army personnel, wearing Khaki uniforms and carrying STEN guns and SLRs (self-loading rifles), arrived at the erstwhile Dhaka Central Jail around 4:00am on November 3, 1975.

The five, including one who introduced himself as Captain Muslemuddin, attached to the Bangabhaban, entered the jail and brutally killed four persons, says the FIR.

The leaders had been put behind bars soon after the August 15, 1975, bloodbath that claimed the lives of Bangabandhu Sheikh Mujibur Rahman and most of his family members.

The four leaders, who led the Liberation War in 1971 after Bangabandhu’s detention by the Pakistan army, were shot dead following repeated bayonet charges in the jail.

A day after the jail killing, Kazi Abdul Awal, the then deputy inspector general (prisons), filed the FIR with Lalbagh Police Station.

ABM Fazlul Karim, the then OC of the police station, was tasked with the investigation and he visited the scene where a magistrate made an inquest report of the bodies. Later, a postmortem report was prepared and the OC collected evidence from the spot of the killings.

But the infamous Indemnity Ordinance blocked the investigation and the trial for about 21 years until officers of the Criminal Investigation Department (CID) reopened the probe on August 18, 1996.

In 2004, a trial court handed punishments to 11 perpetrators including Abdul Majed for the killings.

The government could not even trace eight of the 10, despite making efforts through diplomatic channels, intelligence agencies and the Interpol to bring the fugitives back home.

On several occasions, Law Minister Anisul Huq said the government was planning to set up a commission to identify all those behind the killings of Bangabandhu and the four leaders.

Yesterday, Minister Anisul Huq could not be reached for his comment on this issue despite repeated attempts over cellphone.

In November last year, he told The Daily Star that the government had already taken legal steps and engaged with the US and the Canadian governments to bring back Rashed and Noor to execute the Supreme Court verdict against them.

The law minister also reiterated the government’s promise that it would constitute a commission.

Talking to The Daily Star, Attorney General AM Amin Uddin yesterday said the government has been facing some legal complexities in bringing the fugitive killers of the four national leaders back to the country.

However, the government has been trying to bring them back to the country, he said.

Amin Uddin, also the president of the Supreme Court Bar Association, said the killers had assassinated the four national leaders in the Dhaka Central Jail, the most guarded place, with the approval of the then autocratic government.

The killing of the four national leaders is one of the most heinous and inhuman incidents in the country, the attorney general added.

The Supreme Court in its judgment in the jail killing case observed that the assassination of the four national leaders was the result of a criminal conspiracy.

The accused could not have carried out the killings unless very powerful state machineries were involved in the conspiracy, the then chief justice Surendra Kumar Sinha said in the verdict.

The apex court on April 30, 2013, upheld a Dhaka court’s verdict that awarded death sentences to three former army personnel and life imprisonment to eight other people for killing the four national leaders.

The following year, the SC exempted the four from charges of killing the national leaders as they had been executed.

Earlier, in August 2008, the High Court had upheld the capital punishment to Muslemuddin and acquitted Marfat, Hashem, Farooq, Shahriar, Mohiuddin and Bazlul Huda in the jail killing case.

Barrister Abdullah Al Mamun, the state defence lawyer appointed by the SC for Marfat and Hashem, yesterday told this correspondent that he did not know the whereabouts of the two accused.

“Marfat Ali Shah, Abdul Hashem Mridha and their relatives have never communicated with me,” he added.