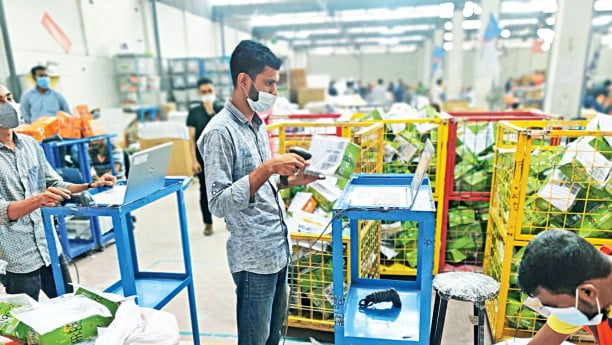 To understand what a well-developed e-commerce ecosystem can do for Bangladesh, you wouldn’t need to look very far.

In the fiscal year 2017, Alibaba, the Chinese e-commerce giant, had a gross merchandise value of USD 547 billion, which would place it one position below in GDP ranking from the nation of Saudi Arabia (USD 639.62 billion) and one position above Argentina (USD 545.12 billion). If the company’s gross merchandise value were to be treated as GDP, that would place it among the 21 countries with the highest GDP in the world.

Alibaba projected that with its current trajectory, it would create 100 million jobs and support 10 million profitable businesses on its platforms by 2036.

The most significant aspect of e-commerce that needs to be appreciated, first and foremost, is that buying and selling is simply one part of e-commerce. E-commerce allows for significantly reducing national inventory and distribution costs.

Imagine having to store and distribute every essential and non-essential product to every grocery store and local market across the country. Imagine the amount of system loss and the logistical nightmare associated with it.

For Bangladesh, there isn’t much need for imagination. We are unfortunately stuck in the old system, as we fail to build up the e-commerce ecosystem that would eliminate these problems. Even though the landscape is changing, we are not doing it fast enough.

An e-commerce ecosystem, like the natural ecosystem, needs a lot of different components to come together and support each other to sustain, thus creating a “system” which will serve a bigger purpose.

E-commerce marketplaces or platforms, which in simpler terms mean the website where consumers can see products and order, are certainly an important piece of the puzzle. But it cannot function without other essential parts such as a payment gateway (a digital mechanism that enables and ensures safe online transactions) and delivery infrastructures (which include efficient transportation systems for cargos), among other things.

For the first time, the pandemic forced consumers to rely on online shopping, resulting in the Bangladeshi e-commerce market to exceed one and a half billion US dollars. Bangladesh was ranked 46th in e-commerce revenue in the world in 2019, whereas it is the 8th most populated country in the world. This shows the gap between the reality and the opportunity that could be taken advantage of.

The neighbouring India achieved a lot in e-commerce. The recent involvement of Google in the country’s e-commerce sector has been called a “game changer,” and for good reasons. Even though the penetration of e-commerce is low in India compared to markets like the United States, and despite having the second largest user base in the world, it is nevertheless growing rapidly, with around 6 million new entrants every month.

So, Google’s announcement in July this year about investing USD 4.5 billion into Jio Platforms, the digital business wing of India’s mighty Reliance Industries, was really surprising-but-not-surprising. Surprising, because it’s seen as a “bet,” and yet not surprising, because it’s easy to see why foreign investors would want a share in the massive one-billion-strong market that is India. But it is also not surprising because India has been working to build up its e-commerce ecosystem, and powerful corporations like Reliance put their weight behind it.

The tech giant will invest the money in Reliance’s recently launched online retail business JioMart. And this came only two months after Facebook invested USD 5.7 billion in Jio Platforms in April.

Even though market share is the ultimate goal, it wasn’t the primary objective of these massive partnerships. The apparent primary focus is acquisition of new customers as evidenced by, among other things, the sharing of data between WhatsApp and JioMart. Immediately after the partnership was officiated, Facebook-owned WhatsApp began sharing its 400-odd million user data with JioMart.

In Bangladesh, E-valy seems to be following the same principles. In other words, the relatively new e-commerce platform focused sharply on acquisition of customers, which simply means connecting a wide array of consumers to its platform, with the ultimate objective of expediting migration from offline to online. Its aggressive customer acquisition, however, has been met with suspicion.

While any commerce environment should be subjected to appropriate and legal oversight, it is equally important to be open-minded about the new ways of doing things. The radical cashback scheme by E-valy has raised eyebrows, and legal authorities must ensure that the law is not broken. But that should not mean acting callously and potentially derailing a successful endeavour.

The company’s tremendous success in bringing in an unprecedented amount of customers on board in a minimally digitised environment may be exactly what Bangladesh needs at this point to jolt the country into an e-commerce ecosystem. If that happens, it will open up many opportunities, including the very real opportunities for foreign direct investment like India is getting right in front of our eyes. Bangladesh’s tremendous asset is its population.

It goes without saying that key policy recommendations by relevant trade bodies such as the E-Commerce Association of Bangladesh (e-CAB) need to be implemented fully—which include affordable Broadband price with higher bandwidth, making banking and mobile payment interoperable, and encouraging domestic and foreign investors by making easy investment and dividend repatriation policy.

Experts have also urged the authorities to integrate the vast number of cottage, micro, and small industries spread across the country. China has successfully integrated their cottage and micro firms through e-commerce, and Bangladesh can study the success stories and formulate its own strategies.

Just like China and India are taking advantage of their huge populations, so should we. Ensuring the maximum penetration of e-commerce is the most important measure to take if we are serious about realising the massive potential that e-commerce offers.

Aftab Ul Islam is former president of the American Chamber of Commerce in Bangladesh, and Bangladesh Computer Samity (BCS).