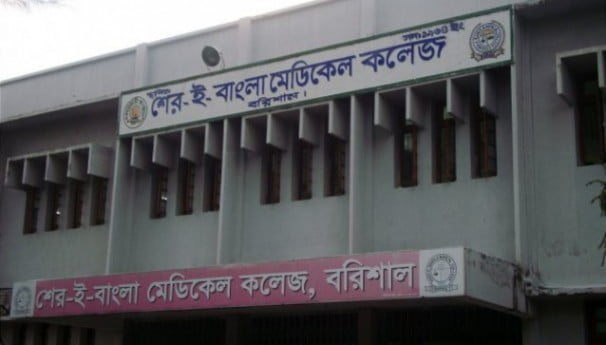 Interns at Barishal Sher-e-Bangla Medical College Hospital went on an indefinite strike yesterday, to realise their three-point demands including withdrawal of a case filed by a doctor against some their leaders.

Around 150 interns started the strike from 2:00pm yesterday, causing immense sufferings to the patients.

Before that, leaders of Intern Doctors’ Association submitted a memorandum to the director of the hospital, bringing allegation against Dr Masud Khan, an assistant registrar of Medicine unit-4, of “irregular activities”.

A section of patients alleged that they did not get any service in the afternoon and evening yesterday, reports our Barishal correspondent.

Bharoti, a patient of medicine ward from Jhalakathi, said she may leave hospital as she is getting no service there.

The interns are demanding withdrawal of a “false” case filed by Dr Masud against some interns, probe into the allegations of irregularities against the doctor and taking acting against him for spreading “false” information through mass media and social media.

On October 21, Dr Masud submitted a complaint to the hospital’s Director Dr Bakir Hossain against Sajal Pande and Dr Torikul Islam, president and general secretary of Intern Doctors’ Association respectively, and 8/10 other interns “for carrying out an attack on him”.

On the following day, the interns gathered in front of the hospital and brought allegation of “commission business” against Dr Masud, saying that he took commission from different diagnostic centres. Later, the hospital authorities formed an investigation committee to probe into the allegation.

The interns shut the emergency unit and observed work abstention for two and a half hours from midnight on October 29.

Dr Masud filed a case with Barishal Kotwali Police Station against the president and general secretary of the interns’ association on October 30.

Contacted, Dr Bakir Hossain said he tried to sit with the interns and Dr Masud to settle the issue but he failed.