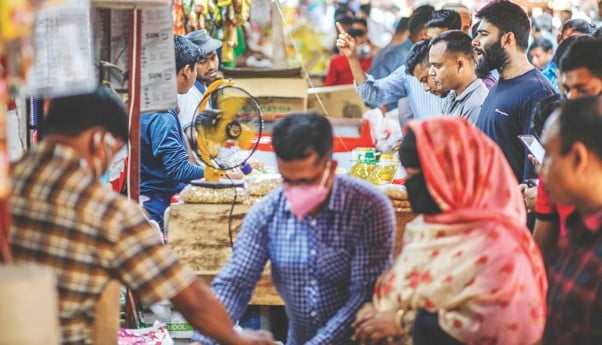 Inflation rose to 6.44 per cent in October, the highest in at least five years, driven by a sharp increase in the price of food items, official figures showed yesterday.

This was the third consecutive monthly increase in inflation as recent floods and rains damaged crops and pushed up the price of rice and vegetables.

October’s CPI is 97 basis points higher than it was in the same month last year. General inflation has been on the upward trend since July.  Food inflation made a sharp rise, climbing by 84 basis points to 7.34 per cent, largely due to the increase in the price of rice.

The price of medium quality rice edged up to Tk 49.25 each kilogram in October from Tk 48.19 in the same month a year ago. The price of coarse grain remained almost unchanged at Tk 43.58 per kg last month from Tk 44 the previous month, according to data from the Food and Agriculture Organisation.

The price of pulses and egg as well as vegetables such as potato, brinjal, lady’s finger and papaya went up in October compared to September, according to a document of the national statistical agency.