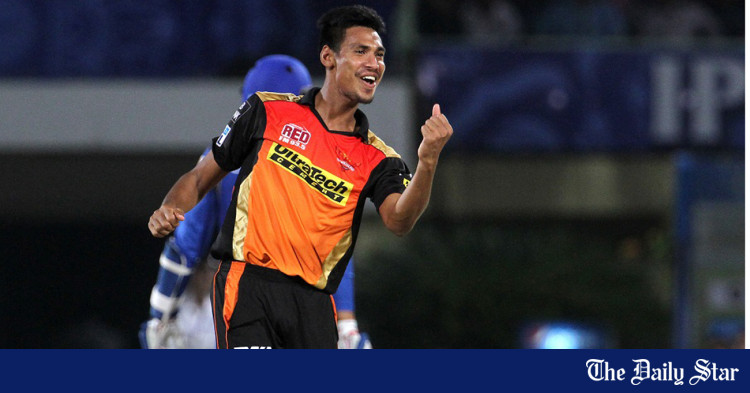 Mustafizur recorded his best figures in the IPL with three wickets against Mumbai Indians. Photo: BCCI

The three-wicket haul moved the left-hander to joint-second place on the wicket-takers’ list with a total of 13 scalps in nine matches. He is one short of Mitchell McClenaghan who took 14 wickets in 10 matches.

The 20-year-old currently has the best bowling average, 15.61, and the best economy rate, 6.15, among bowlers who have played at least eight matches in the tournament.

Sunrisers Hyderabad have relied on Mustafizur many times in the ongoing Indian Premier League, but today was a combined effort. Ashish Nehra, Bhuvneshwar Kumar and Barinder Sran reduced Mumbai Indians to 49 for 6 in nine overs before Mustafizur was given the ball.

The shrewd left-hander sent Hardik Pandya back with a cutter on his very first ball against which Pandya failed to adjust. Pandya attempted a slice through point, but the ball went into the keeper’s hands, the umpire adjudged to be out although television replays were inconclusive.

Then again on the first ball of his second over, Fizz bowled another slower delivery that went away from the batsman, getting an edge off Tim Southee and into the keeper’s path.

The Satkhira man scalped McClenaghan in the last delivery of his third over, offering the batsman a loopy catch at midwicket.

Mustafizur did not bowl the fourth over as David Warner allowed other bowlers to pick up the tail. And they skilfully bowled out the hosts for just 92 runs in 16.3 overs.