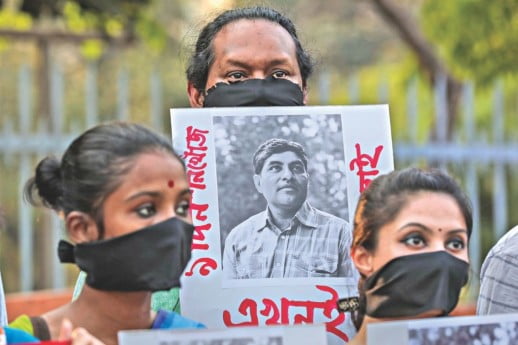 In the last decade, freedom of expression has been in the decline globally, from authoritarian to traditionally liberal states. There are trends of oppression, repression of dissent, and delegitimising peaceful protests and opinions. More than half of the world’s population is now living in a country in which freedom of expression is categorised as “in crisis.”

This was highlighted in the Global Expression Report (GxR) 2019/2020 released by ARTICLE 19, a British human rights organisation mandated in the defence and promotion of freedom of expression and information. The protection of the right to freedom of expression and information is now at its lowest point than it was ever before. The right to speak and be heard are tools for effective public engagement and participation, which provide checks and balances for those who govern our societies. This has become more apparent with Covid-19, where the free-flow of information becomes crucial to address public health needs and access to life-saving information. Tackling these issues and addressing public needs become difficult due to the worsening environment of global expression. Free speech and information are fundamental components to the functioning of democracy, which provides credibility to any government. Thus, democracy and freedom of expression are inextricably linked and are important for ensuring equality, development and non-discrimination.

In Bangladesh, civic spaces have been under threat for some time. In the GxR report, Bangladesh ranked 132 out of 162 countries around the world, coming at the bottom five in the Asia Pacific region. In the past decade, Bangladesh has made significant strides in human development indicators and is on its way to graduate from its status as a Least Developed Country (LDC) to a Developing Country. While income per capita, life expectancy, education and access to healthcare progressed, human rights regressed. According to the report, Bangladesh scored 15 out of a total of 100 in Freedom of Expression, putting it in the “crisis” group along with China, Turkey, Russia and Iran. This means 163 million Bangladeshis are living in a state where human rights standards, both in legislation and practice, are violated. With rising attacks on media, journalists and peaceful protests, and rampant enforced disappearances, it paints a worrisome picture of Bangladesh’s future.

One of the main reasons for this regression in freedom of expression is The Digital Security Act (DSA), passed in October 2018, replacing the Information and Communication Technology Act (ICT). Instead of reforming the problematic aspects of the ICT Act, DSA criminalises a wide range of speech and gives the authorities power to interpret and use the law according to how they see fit. In 2019 alone, at least 1,325 people were arrested in 732 cases filed under the draconian DSA—more than three detentions per day. In 2020, the number of detained people under DSA crossed the 500 mark in the first half of the year. Additionally, according to the Paris-based International Federation for Human Rights (FIDH), between 2009 and 2018, at least 507 people were subjected to enforced disappearances. Of them, 62 people were found dead, 286 returned alive, and the fate and whereabouts of 159 are still unknown. Police brutality and use of force are the other issues the country has seen in the past year, where peaceful protests turned violent or activists and young students participating in the protests were harassed and beaten by authorities or by members of the student wing of political parties.

This begs the question of why this is happening in Bangladesh. Article 11 of the Constitution states that Bangladesh is a democracy that guarantees fundamental human rights and freedom to its people, while Article 37 allows freedom of assembly for its people. Free speech, thought and conscience are enshrined under Article 39. Yet civil liberties are highly restricted, with an alarming trend of shrinking civic spaces. Loopholes and vague interpretations of the law along with the culture of impunity leave room for exploitation, leading to an opaque judicial system. Most of these laws bear the legacy left behind by the British colonial rulers, and for Bangladesh to move forward towards a brighter future, there is a strong need for legal reforms in the country to reinforce fundamental rights and reflect the democratic values of the 21st century.

For the country to grow and progress sustainably, it needs to reflect the current times and the wants of its people. Systemic failures such as corruption, lack of accountability and weak human rights principles are holding Bangladesh back from achieving its full potential.

Media, as the fourth estate, is an integral part of society, as it directs the press to uphold democracy and creates checks and balances in governance by facilitating the free flow of information and ensuring accountability. Yet, with an increase in clampdown on dissent and free speech, journalists feel pressured to practice self-censorship, affecting the free flow of information.

Bangladesh has long been focused on economic growth. The protection and promotion of human rights, especially freedom of expression and the free flow of information, which are central to a democracy, is not only the right thing to do but the smart thing to do in economic terms. Research has found that freedom and participation rights have a positive long-term effect on economic growth. The rights to freedom of assembly, association and electoral self-determination are especially essential for a democratic society. This was affirmed in the World Summit for Social Development in 1995, where states made a declaration stating sustainable and equitable development must incorporate democracy, social justice, economic development, environmental protection, transparent and accountable governance, and universal respect for, and observance of, all human rights. Thus, human rights and development are intertwined and the fundamentals of these are safe civic spaces and strong civil liberties.

Without having freedom of expression and information, we are left in the darkness and are prevented from holding those in power accountable, which puts our basic rights in danger. States and authorities are obligated to its people to ensure the protection of their rights and uphold the commitments it made, nationally and internationally. Progress cannot be made by leaving people behind. Bangladesh needs to reaffirm its commitment to ensuring better protection of freedom of expression and civic spaces. Having its people’s voices heard and engaging in public spaces will help to better understand the needs of the people and result in better governance. It is in the state’s interest to use a holistic approach, with human rights principles at the core of social and economic development. The people of Bangladesh deserve better. It is high time that these systemic failures are addressed for an effective democratic system, which includes the right of the citizens to raise questions.

Faruq Faisel is the Regional Director of ARTICLE 19 Bangladesh and South Asia. GxR report is available at: https://www.article19.org/gxr2020/