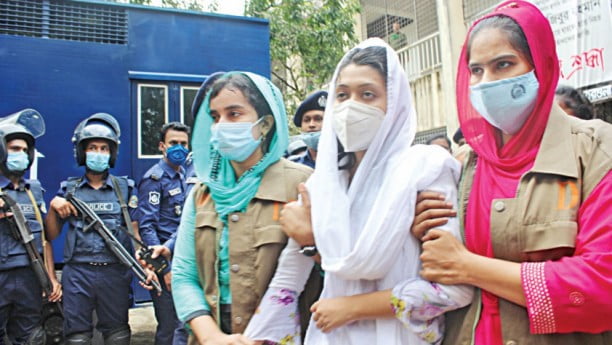 The High Court today admitted for hearing the appeal filed by Ayesha Siddika Minni challenging the Barguna court verdict that convicted and sentenced her to death in the Rifat Sharif murder case.

The HC also stayed the trial court order that fined her Tk 50,000 in the case.

The bench of Justice M Enayetur Rahim and Justice Md Mostafizur Rahman came up with the order after Ayesha Siddika Minni’s lawyer ZI Khan Panna placed the appeal before the judges for its admission for hearing.

Advocate ZI Khan Panna told The Daily Star that they will take necessary steps so that the HC holds hearing of the appeal of his client Minni as soon as possible.

He said some other convicts have also filed appeals with the HC against the Barguna court verdict on them in the same case.

On October 6, Minni filed the appeal with the HC challenging the Barguna court verdict that convicted and sentenced her to death in the Rifat Sharif murder case.

Makkia Fatema Islam, the filing lawyer of Minni, submitted the 18-page appeal on behalf of her client along with more than 400-page documents of the case seeking her (Minni) acquittal of the charges brought against her.

On that day, ZI Khan Panna told this correspondent that the trial court has convicted and sentenced Minni based on her confessional statement made under section 164 of the Code of Criminal Procedure (CrPC) and CCTV footage.

“We will prove that Minni is completely innocent during hearing of the appeal before the High Court,” he said.

If a lower court sentences any person to death in a case, its judgment is examined by the HC through hearing arguments for confirmation of the death sentence. The case documents and judgment reach as death reference to the HC from the lower court in seven days after the latter delivers the verdict.