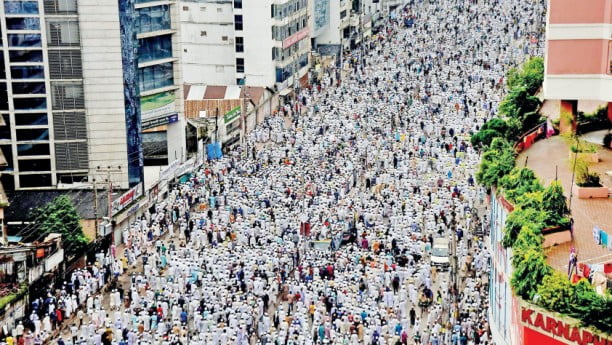 Thousands of Hefajat leaders and activists gathered near Baitul Mukarram National Mosque yesterday morning, aiming to lay siege to the French embassy in Dhaka, bringing traffic to a standstill on some of busiest streets in the city.

Members of Hefajat-e-Islam Bangladesh and Qawmi madrasa students from different parts of Dhaka, its outskirts and adjoining districts held the programme to protest against a caricature of Prophet Muhammad (PBUH) in France and subsequent remarks made by French President Emmanuel Macron about Islam.

After addressing a brief rally at the gate on the northern side of the national mosque, the protestors started marching towards the French embassy in a huge procession.

After police obstructed the procession at Shantinagar intersection, Hefajat leaders held another brief rally which was addressed by their Secretary General Junaid Babunagari.

Babunagari demanded that the Bangladesh government sever diplomatic ties with France, expel the ambassador and close the embassy within 24 hours, in protest to the exhibition of caricatures of the Holy Prophet (PBUH) and the remarks made by President Macron.

Hefajat leaders at the rally also demanded that the Bangladesh prime minister bring a state condemnation and hate motion against the French statement in parliament. It also demanded a boycott of French products.

Abul Hossain, officer-in-charge of Gulshan Police Station, said a large number of policemen were present in the area and security measures were beefed up in and around the French embassy.

Hundreds of vehicles got stuck on different city streets connected to the aforesaid areas.

A large number of vehicles arriving in Dhaka also got stuck on the Hanif flyover, witnesses said.

The flyover ends at Shanirakhra and Postagola were packed with vehicles from around noon to 3:00pm, they said.

Hundreds of people had to walk towards their destination in the scorching heat.

Abul Kalam Azad said his colleague Zahirul Islam, who lives in Shanir Akhra area, comes to their Motijheel office by bus. Due to the traffic jams yesterday, the bus turned back, dropping all passengers, including Zahirul, in Jatrabari area.

“My colleague reached the office around an hour later after he had got a motorbike ride and walked some distances,” Kalam said, adding that if one cannot reach office by 9:15am for three days, one day’s salary will be deducted by the company that employs them.

Worker of another company Abad Uzzaman said, “I left Rampura by rickshaw for Dhaka Medical College Hospital around noon, but my rickshaw got stuck in traffic near Mouchak. It took me more than two hours to reach my destination. It usually takes me an hour.”

Earlier last month, Macron pledged to fight “Islamist separatism”, which he said, was threatening to take control in some Muslim communities around France.

He also described Islam as a religion “in crisis” worldwide.

His comments, in addition to his backing of satirical outlets publishing caricatures of the Prophet Muhammad (PBUH), has led to a social media campaign calling for the boycott of French products from supermarkets in Arab countries and Turkey.