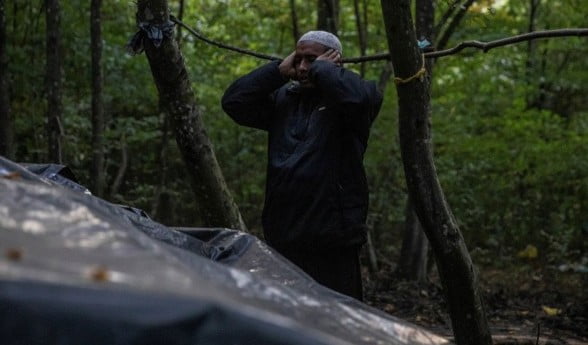 If someone looks up Velika Kladusa on Pinterest, they’ll find lovely photos of the town and its beautiful landscape. Pretty as it may be, this little known town, in the far northwest of Bosnia and Herzegovina, has been in the news in the recent past for all the wrong reasons. Hundreds of migrants hoping to make their fortune in rich European countries such as Italy and Spain are being forced to pass uncertain days in the woods of Velika Kladusa.

According to a report published by this daily on October 20, “Several hundred Bangladeshis are spending nights in overcrowded shacks made of polythene sheets. They don’t have sufficient food, drinking water and emergency medical supplies… Many of the Bangladeshis there said officials from some international agencies distributed food among them and provided medical support occasionally but those were not sufficient.” And having failed to secure shelter at a refugee camp nearby, these desperate people had to seek refuge in the forest.

These migrants live in shacks made of tarp that do little to protect them from the cold and rain. Some of the others have sought shelter in an abandoned factory; the damaged roof and walls of the factory provide little relief from the unsympathetic weather.

And the ones who try to cross into Croatia to ultimately land in Italy or Spain are often allegedly subjected to human rights abuses by the Croatian border police, who have been repeatedly accused of resorting to torture on illegal migrants. According to victims, the Croatian police not only brutally beat them up and push them back into Bosnia, but also seize their possessions, including, money, phones, and even clothes.

Danish Refugee Council (DRC) Secretary General Charlotte Slente told Deutsche Welle (DW), “People from different groups and nationalities have independently reported inhumane treatment, savage beatings and even sexual abuse at the border. There is an urgent need to ensure that independent border-monitoring mechanisms are in place to prevent these abuses and to ensure that all reports of abuse are transparently and credibly investigated—and those responsible are held to account.”

While no doubt these migrants cannot and should not attempt to unlawfully cross into another country, they are human beings nonetheless and no one can violate their fundamental rights to life and liberty, freedom from slavery and torture, freedom of opinion and expression, the right to work and education and more. Everyone is entitled to these rights, without discrimination, according to fundamental human rights as defined by the United Nations.

What are the concerned authorities in Bangladesh doing to redress the sufferings of these trapped migrants? Various organisations, including Bangladesh Civil Society for Migrants (BCSM) and BASUG-Diaspora and Development, a Netherlands-based diaspora organisation, have called upon the government to take immediate measures to address the sufferings of the individuals. But so far, no major action has been taken to bring these people back, or for that matter provide them with subsistence to survive the harsh Bosnian winter where the temperature, according to a DW report, has already dropped below two degrees Celsius.

However, the recent reports by the German broadcaster that recorded the miseries of the migrants from many South Asian nations, including Bangladesh, is not the first time that this has come to light. On June 13, 2019, the Associated Press reported that aid groups were warning of an impending humanitarian crisis in Bosnia, as the number of migrants kept increasing in the northwestern cities of Cazin, Bihac and Velika Kladusa. The report mentioned that the majority of the migrants were from Bangladesh, Iraq, Pakistan, Syria and Afghanistan. One might be pardoned for wondering why the authorities in Bangladesh did not take immediate measures to bring back its citizens even then.

Bangladesh’s struggles with Trafficking in Persons (TIP) and Smuggling of Migrants (SOM) are not new. Every year, hundreds and thousands of people from Bangladesh pay exorbitant “fees” to brokers or dalals, to try their fortunes abroad. In fact, the smuggling and trafficking rackets target susceptible individuals from low income families and lure them into trafficking and smuggling with false promises of a better life abroad. The unsuspecting victims, unaware of the true nature of these so-called agencies, pay hefty amounts to the traffickers, often selling their assets or securing loans. Only when it is too late do the victims of TIP or SOM realise the trap they have fallen into.

Bangladesh is unfortunately well versed in handling, or perhaps not handling, the plight of its citizens who go abroad—legally or illegally—in search of a better future. From failing to eliminate the economic and social factors that force people to take such desperate measures, to not taking adequate measures to ensure the security of migrant workers abroad, the seemingly half-hearted actions taken by the authorities raise questions about their intention and/or ability to address these in the first place. Let’s take the case of the tragic plight of the female migrant workers—bodies of 473 of them have been returned in shrouds from the Middle East alone from 2016 to September 2020. And what have we done to address that? Does the government not have any responsibility in ensuring that women workers who go abroad to work are not tortured and abused or worse, killed while trying to earn a decent living?

We have seen reports of migrants being inhumanely tortured in Libya. And yet, we are allowing our people to suffer in the Libyan desert because there is a war going on there, and the traffickers are using the situation as a shield to carry out their criminal activities. Why did it take the gruesome murder of 26 Bangladeshi nationals for the authorities to bust this trafficking ring in Bangladesh?

These are unpleasant questions, but it is high time the authorities concerned spared them some thought. With the ongoing global health crisis pushing people further into poverty—a recent World Bank report suggests that an additional 88 million to 115 million people across the world may be pushed into extreme poverty this year, with the total rising to as many as 150 million by 2021, depending on the severity of the economic contraction—it has become easier for traffickers and smugglers to manipulate vulnerable people and victimise them. Now more than ever, the concerned authorities need to demonstrate strong political will through proactive measures to end trafficking and smuggling of people.

The authorities need to be more vigilant, more agile and more decisive in taking action against those who prey on the vulnerable, and those who fail to ensure the safety of our citizens abroad, irrespective of their official position or political affiliation. The economic and social triggers also need to be rooted out. With the right approach and the right actions, trafficking and smuggling of people can be eliminated for good. But do we have the political will?

Tasneem Tayeb is a columnist for The Daily Star.