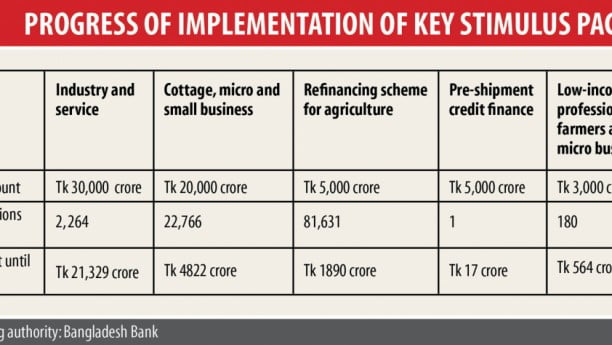 Banks disbursed 48 per cent of Tk 76,000 crore funds they have been entrusted with lending to the sectors creaking under the pressure of the coronavirus pandemic as of September, official data showed.

Since the Covid-19 hit Bangladesh on March 26, the government has unveiled about 20 stimulus packages involving Tk 120,053 crore, which is 4.3 per cent of the country’s gross domestic product.

Banks have been given most of the responsibility to disburse the funds in the form of working capital loans, small loans and salary support under the packages.

The finance division presented a progress report of the stimulus packages at the cabinet meeting on Monday.

The prime minister also gave a number of directives on the implementation of the packages.

The finance division would arrange three meetings at the end of November to discuss the progress of the stimulus packages with the stakeholders to accelerate execution.

In one of the meetings, the stakeholders would discuss the progress of the stimulus packages unveiled for the cottage, micro, small and medium industries.

A similar meeting would discuss the packages introduced for the large industries and another would shed light on the progress of other stimulus packages, such as food programmes.

The meetings aim at removing barriers standing in the way of the packages’ implementation, revamping them and speeding up their execution, said an official of the finance ministry.

The export-oriented sector, mainly the readymade garments, is ahead of all so far. Initially, they were given Tk 5,000 crore.

When the sector demanded for more when the funds exhausted, the government allocated another Tk 3,000 crore to keep the important sector afloat. The second tranche has also been distributed.

Significant progress was made in dispensing the Tk 33,000 crore funds to the affected large industries and services at 9 per cent interest to be repaid equally by the borrowers and the government as subsidy.

The government announced Tk 20,000 crore as the working capital support to the pandemic-hit small businesses at 9 per cent interest — 4 per cent to be paid by the borrower and 5 per cent by the government as subsidy.

Fifty-six banks and 20 non-banks disbursed Tk 4,822 crore from the package and nearly half of the amount was given in September alone. Some 21,642 male entrepreneurs and 1,124 female entrepreneurs received the loans.

Out of the $5 billion Export Development Fund, about $2.99 billion was distributed among 2,202 applicants. Because of the pandemic, the central bank extended the size of the EDF to $5 billion from $3.5 billion and cut the interest rate from a variable 5 per cent to a fixed 2 per cent.

The pre-shipment credit refinance scheme amounting to Tk 5,000 crore for export-oriented industries has also not made any progress.

Bangladesh Bank issued the scheme on April 13, but only Tk 16.6 crore was disbursed as of September.

As of August 4, 30 banks signed deals with the BB for releasing the fund.

This slow pace was also observed in the case of the special refinancing scheme worth Tk 5,000 crore for the agricultural sector. Some 78,526 farmers or farms received Tk 1,892 crore from 43 banks, which has less than one third of the allocation.

The government has extended the deadline to disburse the loans up to December 31 this year.

Similar was the case for the disbursement of Tk 3,000 crore in refinance loans meant for low-income farmers and small traders in the agriculture sector. The progress of lending was so slow that the Bangladesh Bank last week extended its timeframe.

The packages have been provided in the form of low-cost loans to micro, small, medium and large industries and services, food security, social protection and special allowances as the pandemic-induced shutdown paralysed the economy, destroyed millions of jobs and created new poor.

Of the stimulus package that set aside Tk 30,000 crore for the large industries and services sector, Tk 21,329 crore was disbursed among 2,264 applicants as of September.

All of the firms that applied for the loans under the package have received the financing, according to the progress report.

In another package, the government has set aside Tk 2,000 crore to provide subsidy support against the suspended interest payments to banks.

Some 7,680,253 clients have applied to the commercial banks seeking Tk 1,390.09 crore in interest subsidies. The disbursement process is underway, according to the report.

Forty-two banks have been given a target to lend Tk 3,153 crore by December under the package.