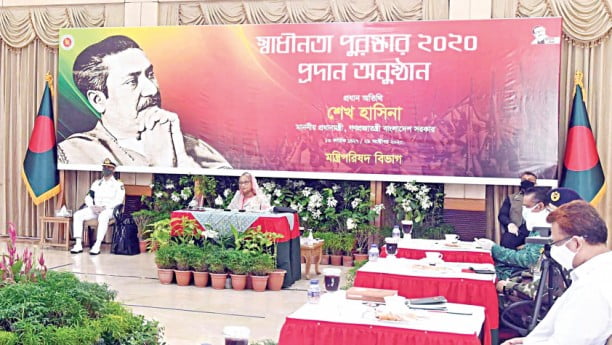 Prime Minister Sheikh Hasina yesterday said the government was working with a goal to make Bangladesh economically self-reliant and brighten its image so that its people can move in the world stage with dignity.

The PM was addressing virtually a function marking the distribution of the Independence Award 2020. She joined the programme, held at the Osmani Memorial Auditorium in the city, through a video conference from the Gono Bhaban.

On behalf of the PM, Liberation War Affairs Minister AKM Mozammel Haque handed the prestigious award to the awardees and their relatives.

Hasina said Bangladesh had lost its potentials after the assassination of Father of the Nation Bangabandhu Sheikh Mujibur Rahman in 1975.

She said her previous government (1996-2001) had started projecting the authentic history of the country’s independence before the people.

Remembering the dream of the Father of the Nation and the great sacrifices of millions of martyrs, the premier said her government wants to rebuild Bangladesh as a hunger- and poverty-free “Golden Bengal”.

“We are running the state with the aim to achieve the goals of taking healthcare services to the doorsteps of people, ensuring education for all, improving the communication system, illuminating every house, providing every homeless and landless person with a house, making Bangladesh economically self-sufficient and enhancing its self-dignity.”

Talking about the Covid-19 pandemic, Hasina said the government was making frantic efforts to protect people and their livelihood and accelerate the pace of economic development.

She urged all to follow the health guidelines to protect themselves from contracting Covid-19 saying that a resurgence of the virus is now seen in Europe.

Hasina said the government has been making all necessary preparations and it is keeping every district hospital ready to deal with the possible second wave of Covid-19 in the country.

Congratulating the award recipients, she said they have made outstanding contributions to their respective fields, including medical, education and culture.

On February 20, the government had picked the renowned personalities and the organisation for the highest state award.

There is a tradition of handing this prestigious award to the recipients on March 25 each year, but it was not possible this year due to the novel coronavirus outbreak.

Since 1977, Bangladesh has been recognising individuals and institutions with the award ahead of the Independence Day every year.

Ministers, chiefs of the three services and members of parliament were present at the function.