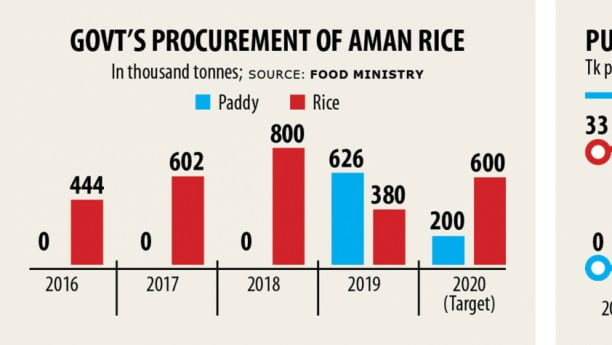 The government yesterday announced to buy paddy and rice at prices that are below the production cost, raising doubts whether it would be able to attain the procurement target of the staple to build an adequate public stock.

The decision came at a meeting of the Food Planning and Monitoring Committee (FPMC) chaired by Food Minister Sadhan Chandra Majumder.

The prices are lower than the agriculture ministry’s estimate of the production cost of Tk 27.29 a kg for paddy and Tk 40.36 per kg for rice.

The decision came more than a month after the food ministry failed to achieve its procurement target of rice and paddy from Boro harvest as millers and farmers were less interested to supply the grains to state storages because of the soaring prices of the staple food.

The government had aimed to buy 8 lakh tonnes of boro paddy during the procurement period from April 26 to September 15. But it could manage to purchase 2.2 lakh tonnes paddy, falling short of the target by 72.5 per cent.

It procured 9.10 lakh tonnes of rice during the period, down from the initial target of 11.50 lakh tonnes, data from the food ministry showed.

Millers were demanding an increase in price for rice but the government did not respond.

Ali said the target price for rice should be Tk 39 per kg. “It will be easier for millers to supply if the government raises the price.”

Field-level food department officials also suggested the government fix the procurement price of paddy up to Tk 28 and rice up to Tk 42 per kg.

“At this situation, if the government wants to buy the grains at higher rates, the prices of rice will go up in the market and this would affect consumers,” he said.

“Hence, the government plans to buy a limited quantity of rice from the domestic market and import a portion to increase public food stocks.”

Currently, the government has a stock of 10.81 lakh tonnes of rice and wheat and Razzaque said the comfortable level of public food stock is 15-16 lakh tonnes.

At yesterday’s meeting, the government decided to retain the price of Aman paddy at Tk 26 each kg, unchanged from last year.

It slashed the Aman paddy purchase goal to a third of the previous year’s actual procurement of 6.26 lakh tonnes.

The FPMC has decided to raise the Aman rice purchase target to 6 lakh tonnes, up from 3.8 lakh tonnes in the previous season and hiked the price of rice to Tk 37 per kg from the previous year’s Tk 36.

The procurement of paddy will begin from November, said Majumder after the meeting.

She said the prices of rice would go up if the government buys from millers at higher rates.

“Under such a scenario, consumers will have to pay higher prices which we do not want. We are planning to buy from the international market,” she said.