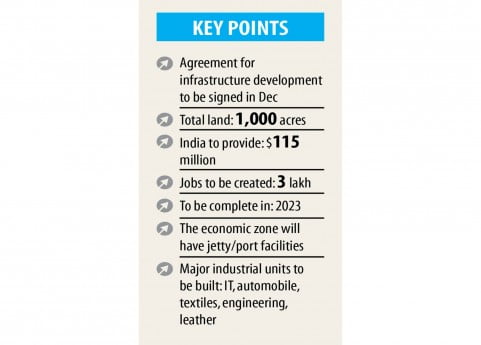 Bangladesh could sign an agreement with India next month to begin construction of the India Special Economic Zone (ISEZ), where billions of dollars of investment are expected to pour in from the neighbouring country.

The deal between the Bangladesh Economic Zones Authority (Beza) and Exim Bank of India may be up for signing during a virtual meeting between the prime ministers of the two countries next month, Beza officials said.

The final draft of the agreement has been prepared and shared with the Indian side.

India approved $115 million for the project on June 11 under its third line of credit amounting to $4.5 billion. The Indian authority has sent a shortlist of consultancy firms to finalise the consultants.

The consultancy firm would design the zone and supervise construction.

Beza is ready to hand over the land to Indian developer Adani SEZ to start the development work at the Bangabandhu Sheikh Mujib Shilpa Nagar (BSMSN) in Mirsarai, Chattogram. The ISEZ, to be set up on 1,000 acres of land, will be exclusively for Indian investors.

Now, discussions are underway over whether Beza will go for a profit-sharing model with developers or charge them rent for land use, he said.

Beza expects the project to be ready for factory set-up by June 2021 and the factories to go into operation in full swing by 2023.

The number of companies that will set up shop at the ISEZ is yet to be finalised. The zone is expected to create about 3 lakh jobs directly, said Paban Chowdhury, executive chairman of the Beza.

The successful implementation of the ISEZ would reduce the trade imbalance between the two countries which is heavily tilted towards India, according to the executive chairman.

In fiscal 2018-19, Bangladesh’s merchandise shipments to India amounted to $1.24 billion, crossing the $1-billion mark for the first time, as per data from the Federation of Bangladesh Chambers of Commerce and Industry.

Bangladesh imported goods worth $7.64 billion in the same year.

“Formalities have almost been completed as Adani Group does not want to waste time,” Chowdhury said.

Adani, India’s largest private port operator, wants to set up a dedicated port in the zone.

The group plans to invest $350 million in Bangladesh to establish an industrial park in the zone under a joint venture with Wilmar, a Singapore-based manufacturer of agro-based foods and allied products.

India also wants to set up an economic zone in Mongla, Bagerhat. But Chowdhury said his office has proposed the Indian side shift the project to the BSMSN as the industrial park in Chattogram would be able to provide more land.

Bangladesh has targeted to set up 100 economic zones to promote balanced development of multi-product industries in different parts of the country, create jobs and attract foreign investment.