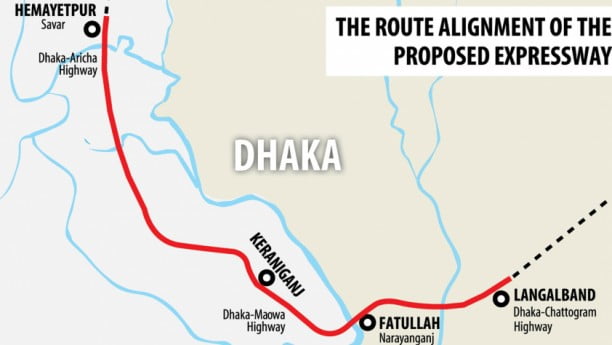 The government is keen on implementing the Dhaka East-West Elevated Expressway project with support from China instead of Malaysia under the public-private partnership (PPP) model.

The Embassy of China has hinted that Beijing could help implement the project, which will cost around $2 billion.

Earlier, Malaysia expressed its willingness through its embassy in Dhaka to invest in the project under a government-to-government arrangement. However, Malaysia seems to have lost its interest.

As a result, the government has backtracked from its original decision to involve Malaysia as the country has not made any serious efforts to contact the Bangladesh Bridge Authority (BBA).

“China is interested to implement the project under a PPP model or a build-operate-transfer contract,” said Quazi Muhammad Ferdous, chief engineer of the BBA.

The BBA does not want to delay the project any further and so, it does not matter which country or company comes forward first, he said.

“We wanted funding from South Korea, China and Singapore to begin the development as soon as possible,” he added.

A proposal has been submitted to China in this regard.

During a meeting with the officials of the Economic Relations Division (ERD) in September, Chinese embassy officials said that the project could be implemented with the cooperation of Chinese firms.

Chinese enterprises have experience with these types of projects, they added.

There are at least 100 Chinese companies currently working in Bangladesh, some of which could be involved with the project, according to sources at the finance ministry.

“There is a scope to implement the project with Chinese involvement as they want to have a bilateral PPP cooperation agreement with Bangladesh,” Ferdous said.

During the meeting in September, it was decided that a seminar would be arranged on how to involve Chinese enterprises working in Bangladesh.

Two Chinese companies have already shown interest to invest and implement the expressway. The government plans to build a nearly 40-kilometre elevated expressway from Hemayetpur in Savar to Madanpur in Narayanganj to create a vital link between major highways.

The East-West Elevated Expressway would allow traffic to switch highways and skip the congested streets of the capital. Vehicles on the Dhaka-Aricha highway would be able to speed towards the Dhaka-Chattogram highway with options to go in the direction of Maowa and Sylhet.

In turn, vehicles from Chattogram and Sylhet would be able to bypass the city and head towards Maowa, Aricha and other northern districts.

The Dhaka-Maowa highway is directly linked with the under-construction Padma Bridge and to Narayanganj via the Dhaka-Narayanganj road.

Once completed, the new expressway would connect the north, south and west parts of the country. It will also significantly reduce traffic congestion in the capital by allowing vehicles bound for other destinations to bypass the city.

The project is a component of the strategic road network plan in the Dhaka Structure Plan (2016-2035) and the Asian Highway Network.

As per BBA’s estimations in 2017, the Dhaka East-West Elevated Expressway was set to cost $1,673.56 million while a bridge on the Bhulta-Araihazar-Banchharampur-Nabinagar road over the river Meghna would require around $182.43 million to complete.

“But now these costs will increase,” Ferdous said.

Once complete, it will be an important part of the Asian Highway-1, which goes through Benapole-Jessore-Kanchpur-Dhaka-Sylhet-Tamabil.

The government is currently implementing the 47km Dhaka Elevated Expressway, which would run from the Shahjalal International Airport to the Dhaka-Chattogram Highway.