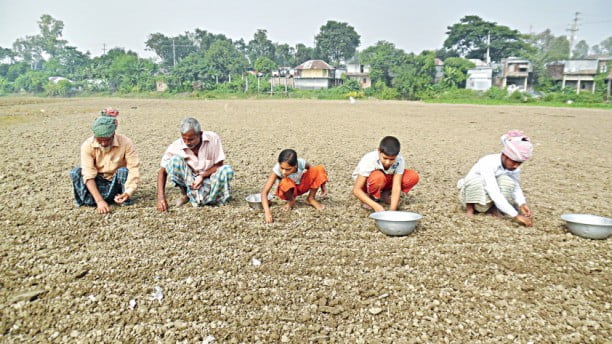 The government has taken an initiative to increase onion production in the country by 10 lakh tonnes within the next three years in order to attain self-sufficiency and cut import dependence.

The move comes as repeated bans on onion exports by India create shortfalls during the lean season, forcing people from all walks-of-life to spend exorbitant prices on the kitchen staple.

To meet this demand, roughly 11 lakh tonnes of onion are imported each year due to inadequate domestic production, according to a roadmap prepared by the Ministry of Agriculture.

To attain self-sufficiency, the agriculture ministry plans to increase the production of modified varieties of onion seeds so that farmers can plant the bulbs both in winter and summer seasons.

“We will give incentives to encourage farmers to produce seeds to increase production further and reduce import dependence. We will also try to expand the cultivation area of onions,” Agriculture Minister Muhammad Abdur Razzaque said yesterday.

Farmers cultivated 26 lakh tonnes of onion on 2.38 lakh hectares of land during the last fiscal, according to the Department of Agricultural Extension.

In order to increase yields, the total acreage of onion plantations has to be increased to nearly 3 lakh hectares, as per the roadmap.

At the same time, a boost is needed in seed production. Onion seed production requires a 57 per cent spike to hit 1,100 tonnes by the year 2023 from 700 tonnes at present, the ministry said.

As part of the government’s plans, scientists have developed some high yield varieties of onions.

Low yield, a lack of quality seeds and inadequate acreage are the main reasons behind the shortfall in domestic production.

But this problem could be addressed by expanding cultivation using improved onion seeds. The newly developed seeds produce a 15-20 per cent higher yield compared to traditional varieties.

Bangladesh’s goal to become self-sufficient in onion production could be made possible by ensuring that farmers get Tk 35-40 per kilogramme during harvest season and by creating storage facilities to maintain seed quality.

The short shelf-life of onion is another major problem for farmers as they are unable to secure profitable prices in absence of storage facilities, Razzaque said.