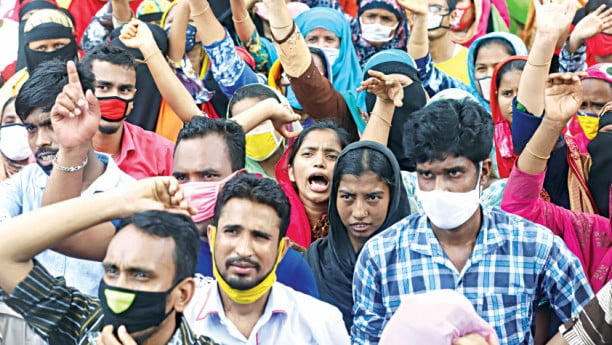 Unemployment in the garment sector deepened in September after touching its lowest point in August, raising questions about job security in the industry amid the risk of a potential second wave of coronavirus infections.

About 8 per cent of garment workers reported that they were unemployed in September, up from 5 per cent the previous month, according to a study conducted by the South Asian Network on Economic Modeling (SANEM) in association with Microfinance Opportunities (MFO).

The results of the survey, carried out among 1,300 garment workers, were released at a webinar on Saturday.

The study found that the percentage of workers that were subject to factory closures, leave without pay, suspension, underemployment or layoffs was 21 per cent in May.

“Although the problems slowly declined over June, July, and August, we saw an uptick in September,” said Guy Stuart, executive director of MFO, a global non-profit committed to understanding the economic realities of low-income and marginalised people.

Stuart raised questions over the state of job security in the apparel industry for the next few months and what policies or programmes would be needed to mitigate the potential loss of employment.

“Due to the pandemic, there are reasons to be concerned about employment and food security in the garment sector,” he said in a press release.

Researchers found that the median monthly working hours for women was around 43 hours. For men, it was 42 hours in April.

Rubana Huq, president of the Bangladesh Garment Manufacturers and Exporters Association (BGMEA), said the rise in exports—which eventually led to an increase in working hours—observed in June-July is solely due to shipments of un-exported orders from previous months.

However, she said there is uncertainty regarding the future in the context of a second wave coronavirus infections.

Besides, many factory owners did not provide full bonuses to their workers while many others faced layoffs.

And due to the layoffs, the workload on the remaining garment workers increased.

“Moreover, in case of a second wave of Covid-19 in the importing countries, the livelihood of the garment workers will be heavily impacted,” Akter added.

Therefore, it is urgent to develop a back-up plan for the garment sector to safeguard the workers from a potential second wave, she said.