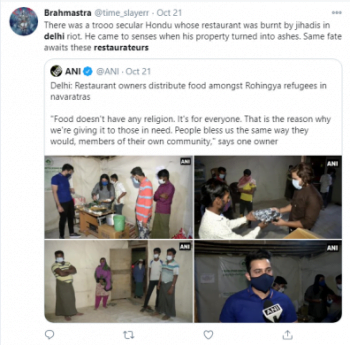 Three restaurants owners in east Delhi evoked mixed response on social media after they served food free of cost to Rohingya refugees at a camp in Jasola on the occasion of the religious festival of Navaratri.

Shiva Sehgal, owner of Josh The High Energy Bar and the Marketplace restaurants gave the food to Rohingyas in Jasola locality in eastern part of Delhi during the Navaratri when many Hindus across India go on fast for nine days and adhere to a strict vegetarian diet sans even onion and garlic.

Sehgal said he had been collaborating with NGOs to feed the needy people irrespective of their religion at different times of the year for the last few years. “This time too, we went to Jasola to distribute food to those in need,” he said.

While a majority of the people appreciated the gesture, some criticized it on Twitter.

Many comments on the microblogging platform flayed the restaurant owner for “selective charity” and asked for a boycott of the eat-outs for “providing food to Rohingyas.”

Sehgal claimed he even got calls on the restaurant phone number asking me why they opted to give food to illegal immigrants. They also reportedly made posts on food delivery apps bringing down the rating of the two restaurants.

The third restaurant which faced the troll army’s backlash for providing food was ‘Swagat’.

Some people tweeted that there were other poor in Delhi including Hindu refugees from Pakistan and displaced persons from Kashmir and wondered why no free food was served to them.

However, there were many others on Twitter who appreciated the three restaurants for serving food to the Rohingya and wanted to patronize them for the initiative by buying food from there and making donations.

“Does food have any religion? It’s for everyone. That was why we served it to those in need in the time of Covid-19 pandemic,” Sehgal said.