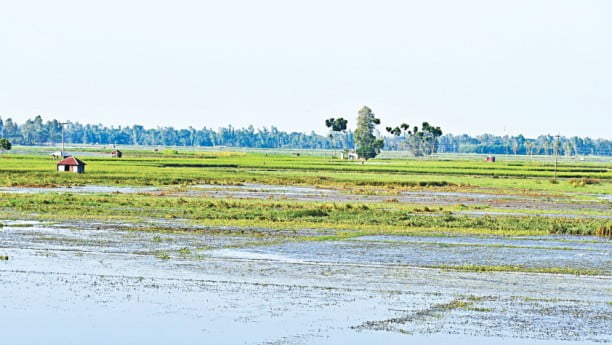 A fourth spell of floods in the Bogura region and a third spell in Rangpur have devastated 35,454 hectares of crops, including advance winter vegetables, according to the Department of Agricultural Extension (DAE).

Heavy downpours in these regions led to flooding which ultimately damaged the crops, resulting in a price hike in the kitchen market, DAE officials said.

“I spent Tk 1.20 lakh for this cultivation and lost everything after flood hit four times in this area,” he said.

Nannu Mia, a farmer of Baghopara village under Bogura’s Sadar upazila, said he has been trying to cultivate chili on 20 decimals of land since August.

“But I failed every time, due to incessant rain. I lost Tk 6,000 on every attempt,” Mia added.

“The Karatoa river flooded my eight bighas of aman paddy and one bigha of banana in the last week of September. Although the flood water has receded, it washed away everything,” said Khaja Mia, a farmer of the Milkipur village under Bogura’s Shibganj upazila.

“Now I have to count losses of Tk 2 lakh due to the recent floods,” he added.

A dam on Karatoa river broke in the last week of September due to excessive water pressure, said Zillur Rahman, a farmer of Khalsi village under Gaibandha’s Gobindaganj upazila.

“The flood washed away my five bighas of aman paddy. I lost everything I had invested for this season. Now, I have to take loans to bear my family expenses,” Rahman said.

In Joypurhat district of Rajshahi, a fourth spell of flooding damaged a total of 70 hectares of cropland worth Tk 21.8 crore, affecting 1,113 farmers in the process.

The losses totalled about Tk 101.53 crore and around 72,709 farmers were affected, according to the additional director of the DAE in Bogura.

The corresponding official from the Rangpur DAE said his region was hit by flooding thrice.

Losses were about Tk 224 crore and 2.77 lakh farmers have been affected as a result, he said.

Rafiqul Islam, sub-assistant agriculture officer of the DAE’s Rangpur regional office, said due to heavy rainfall, the third spell affected new areas as the smaller rivers could not handle excessive amount of water.

“Therefore, three times more farmers were affected by the last flood that started in the middle of September and ended in the second week of October,” he added.

In Gaibandha, the last phase of floods totally damaged 6,000 hectares of crops, including 500 hectares of advance vegetable worth of Tk 68 crore while a total of 71,000 farmers have been affected.

Masudur Rahman, deputy director of the Gaibandha DAE, said the last spell of floods did three times more damage compared to all the previous floods of this year.

“Total one lakh famers have been affected and the lost crops are worth Tk 100 crore,” Rahman said.

Heavy rainfall occurred in very late in the season, when the farmers had already started cultivating advance winter vegetables and aman paddy.

As a result, vegetable prices are rising day by day because of the damage to advance winter crops.

“We have incentives for the 32,500 farmers who were affected by the recent floods. We will provide fertilizers, and seeds of 7 winter crops for free,” said Dulal Hossain, deputy director of the DAE office in Bogura.

In Dinajpur, Panchagarh and Thakurgaon districts, crops such as aman paddy, vegetables and peanuts worth Tk 20.69 crore were damaged due to heavy rains.

Md Sirazul Islam, additional director of the Dinajpur region of the DAE, said continuous rainfall created waterlogging that lasted for a few weeks and destroyed crops in 1,022 hectares.