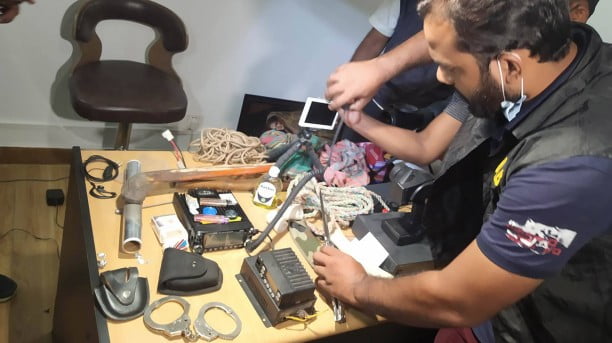 The Rapid Action Battalion today uncovered a “torture cell” made by Erfan Salim, son of Awami League leader and MP Haji Salim, at a multi-storey building in Old Dhaka.

As per information gleaned from Erfan, Rab members conducted a raid in a room on the rooftop of the 17-storey Ashiq Tower in Chawkbazar, said Executive Magistrate Sarwoer Alam.

They also recovered hockey sticks, handcuffs, knives, thick ropes, towels, electric shock wires and other equipment from the room. Erfan used to torture different people after bringing them to the room, he said.

Before the raid, members of the elite force, earlier in the day, arrested Erfan and conducted a drive at Haji Salim’s house on Devdas Lane in Old Dhaka.