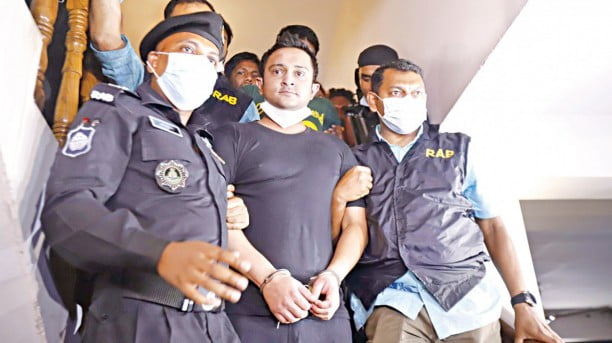 Mohammad Erfan Salim, son of MP Haji Salim, will be sacked from the post of councillor as he was sentenced to imprisonment by a mobile court.

Helaluddin Ahmed, senior secretary to the Local Government Department of the LGED Ministry, said, “We will take action against councilor Erfan Salim when we receive a report from the Dhaka South City Corporation (DSCC) about his conviction.”

The secretary added that the Local Government City Corporation Act states that if a person is convicted by any court, he will be dismissed from his post.

Erfan is councillor of ward 30 of Dhaka South City Corporation.

Rab detained Erfan from his father’s residence at Devdas Lane of Swarighat in Old Dhaka yesterday following a case filed with Dhanmondi Police Station by Lt Wasif Ahmed Khan of Bangladesh Navy for assaulting him.

A mobile court of Rapid Action Battalion (Rab) yesterday sentenced Erfan and his bodyguard Zahid to one year in jail for possessing illegal walkie-talkies and liquor.