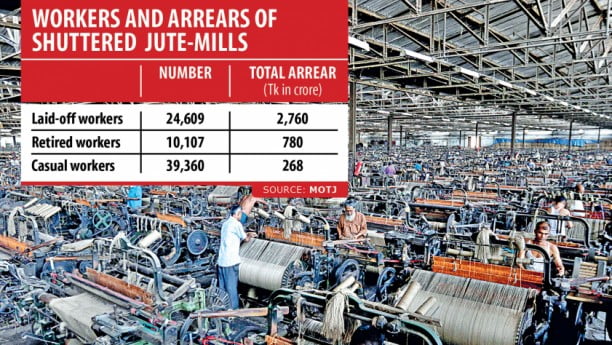 The government will clear the dues of laid-off and retired workers of 25 shuttered state-run jute mills by November this year, said Textiles and Jute Minister Golam Dastagir Gazi yesterday.

A total of 34,716 workers, including 24,609 who have been laid-off, have not received their pay even though three-and-a-half months have passed since the government permanently closed the 25 mills in the face of continued losses.

The Ministry of Textiles and Jute estimates that retired and laid-off workers would get a total of Tk 3,800 crore.

Up until now, the finance ministry sanctioned Tk 1,790 crore for Bangladesh Jute Mills Corporation (BJMC), under which the jute mills had been running, to clear the dues of workers of eight mills, according to a press statement.

“The dues are being cleared through savings certificates and worker’s bank accounts. The process of clearing dues of workers of two more mills will start from October 25,” said Dastagir at a press conference at Bangladesh Secretariat.

The government unveiled this plan at a time when casual and laid-off workers, particularly in the jute industrial belt in Khulna and Jessore, have been demanding the reopening of state-run jute mills.

Apart from permanent workers, the mills provided the means to live for more than 39,000 workers, officials said.

The ministry said the shuttering was a permanent solution to the problems of state-run jute mills. In line with the decision, permanent workers were laid off and they would be provided gratuity, provident fund and other benefits.

The government estimates that permanent workers would get Tk 2,760 crore, the officials added.

The government also formed two panels in July this year to recommend ways for reopening the units in accordance with national and global market demands and to suggest measures regarding the existing employees of the BJMC.

Additional Secretary to the ministry Mohammad Abul Kalam, who headed the committee to recommend an organogram for the BJMC once the mills were shut down, said the panel submitted its report, recommending a downsize of the existing manpower.

The BJMC has 2,950 employees, including officials, and the committee suggested reducing a good number of employees, said officials. The panel also recommended accommodating a portion of employees in other public agencies.

“As the mills are not running, there is no need to keep so many employees on the payroll. The BJMC also does not have the capacity to do so,” he said, declining to give further details.

The downsizing of the existing labour force will be ‘large’, said a senior official of the BJMC.