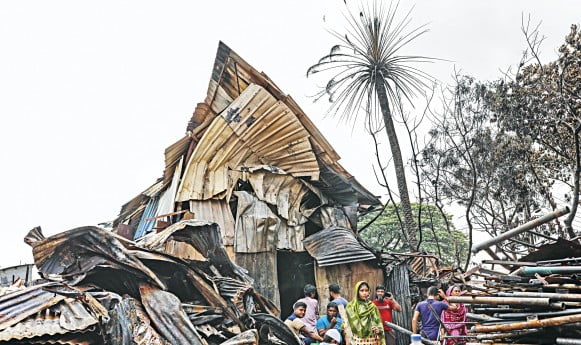 Kohinur Begum (57) came to the capital 25 years ago with her husband, who was a rickshaw puller, and four sons from Bhola, as their house was destroyed by the nearby river.

Like many others of the district, they too decided to settle at the capital’s Notun Bazar slum in Kalyanpur. They went through a lot of difficulties over the years, having to face two massive fires and an eviction. Each time, they had to restart their lives.

This time, the six rooms they used to live in and two shops, which were their means of livelihood, were all gutted in Friday’s fire. They had built everything by taking loans, which still must be repaid.

“Now how will we repay the loans? Where will we even stay?” asked a hopeless Kohinur.

Friday night’s fire did not just raze houses, it engulfed the dreams of people, most of whom are marginalised.

Hard work had changed Kohinur’s luck, and despite the loss of her husband seven years back, her struggle was bearing fruit. She was ready to beat all odds with her now five sons and two daughters.

“I had a wood shop, and my elder son Sohel had a furniture shop. My daughters are tailors, and the others day labourers,” she said.

“We took loan, and built our homes and invested in business…now all has turned into ashes,” Kohinur said, while staring at the burnt remains of what was once their home.

“When I first came to the capital with my husband, we built four rooms in the slum, which were gutted in a massive fire 20 years back. We were homeless for seven months. Later, we built two rooms taking some loans,” she continued.

“After my husband’s death in 2013, another fire gutted the rooms. Again, we rebuilt them. But two years ago, city corporation evicted us from the slum,” she said, adding that when they came back and rebuilt their home after taking loans, the fire once again took everything away.

She said they are yet to repay Tk 1 lakh loan, which they took for building the rooms, adding that there was furniture worth Tk 3 lakh at the shop, which were also bought by taking loan.

Kohinur’s elder daughter Yasmin Begum, said she was staying at a room with her three daughters when the fire engulfed the slum.

“It spread within a moment. The cans of body spray were busting one after another at a nearby scrap shop. When I was about to come out from the room, my younger daughter’s dress caught on fire. Luckily, we were able to douse it,” she said, describing the horrifying ordeal they went through.

“But we couldn’t save any valuables including the TV and fridge,” Yasmin said.

At least 70 shanties and 12 shops were gutted in Friday’s fire, while at least four people were injured.

Of the families affected, the anxiety over what the future may hold is shared by almost every one of them.