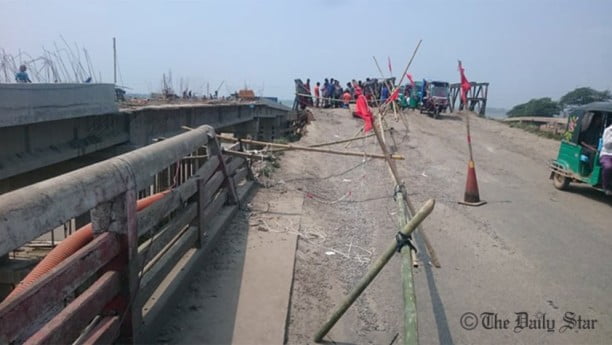 The government has planned to expand the Dhaka-Sylhet highway into four-lane without keeping adequate overpasses and underpasses, which may reduce the service and productivity of the road.

The Roads and Highways Department (RHD) recently submitted the Development Project Plan (DPP) of the long-drawn project worth around Tk 17,400 crore to the Ministry of Road Transport and Bridges.

The two-lane national highway will have four main lanes and two more lanes for slow-moving vehicles under the project to be implemented with Asian Development Bank (ADB) loan in four years.

Although the consultant had laid out the design keeping 23 overpasses/flyovers on each of the major intersections of the highway, the DPP brought down the number  to only six “due to fund constraint”, officials involved with the project said.

Besides, only two underpasses would be constructed on this 210-kilometre road. The number is much lower than the underpasses built on similar four-lane roads under SASEC-1 and SASEC-2 projects, show RHD documents.

“The absence of adequate number of overpasses will create interruption at all intersections [of Dhaka-Sylhet highway], which will reduce the level of service and productivity of the road,” Prof Shamsul Hoque of Buet Civil engineering department, told The Daily Star.

The government would ultimately have to construct overpasses at the intersections to avoid traffic congestion in future but it would then cost more money and in many cases, it may not be at all possible, said the transport expert.

Referring to the Dhaka-Mawa-Bhanga expressway, he said the government should not expand national highways anymore without keeping facilities of expressway.

The Dhaka-Sylhet four-lane highway expansion is one of the 26 projects for which China had committed a $21.5 billion soft loan. A memorandum of understanding (MoU) between Dhaka and Beijing was signed during the Chinese president’s Dhaka visit in 2016.

But the government later decided to do the work using own resources, following failed negotiations with a Chinese company.

Besides, there was an allegation against the Chinese company of offering bribe to a top government official to green-light the work at an inflated cost. At that time, the estimated cost of the project was Tk 11,412 crore.

However, the government finally decided to implement the project with ADB fund. The RHD in 2018 took a separate project at Tk 3,885 crore for land acquisition and utility shifting for expansion of Dhaka-Sylhet and Sylhet-Tamabil highways.

Meanwhile, the consultant firm, which has prepared the design for the Dhaka-Sylhet highway expansion, suggested keeping 23 overpasses at all major intersections to ensure free flow of traffic, a RHD official said.

Md Waliur Rahman, an additional chief engineer of RHD, who is looking after the project, said construction of 23 overpasses will increase the project cost and as ADB found it economically non-viable, they have dropped 17 overpasses for now.

However, there would be six more railway overpasses.

“As ADB declined to fund an economically non-viable project,  we have to drop some overpasses for now. These [overpasses] can be constructed later,” he told this correspondent on October 24, replying to a question.

Waliur Rahman, who is also the project director of SASEC-2, said the ministry held several meetings on the DPP and it is expected to be sent to the Planning Commission soon.

After necessary scrutiny, the DPP would be then sent to Ecnec for approval, as per the usual practice.

Replying to another question, he said they were hopeful about starting the project work in the middle of next year after completion of all other procedures.

The government in March 2013 undertook SASEC Road Connectivity Project-1 to expand 70km road from Joydevpur to Elenga into four-lane, with a provision of only three overpasses and two railway overpasses.

Later, the authority had to revise the project adding four more overpasses and 11 underpasses, which not only escalated the cost but also the duration.

South Asia Subregional Economic Cooperation (SASEC) project-2 was undertaken in September 2016 for upgrading 190km highway from Elenga to Rangpur to four-lane at the cost of Tk 11,899.01 crore.

In the original DPP, it had three overpasses, 39 underpasses and two railway overpasses. In the revised DPP, three more overpasses have been added.

On the other hand, the cost of SASEC-2 project rose to Tk 16,662 crore from Tk 11,899.01 crore after first revision. In both cases, the rise in number of new structures are the main reason behind the escalation of cost and duration.

“We had made mistakes in cases of both the SASEC projects, which we had to rectify. We should not do the same mistake again. Because we ultimately have to construct those overpasses after three or five years,” an RHD engineer said, wishing not be named.

He said Dhaka-Sylhet highway project is going to be implemented following three major road projects — SASEC-1, 2 and Dhaka-Mawa-Bhanga expressway. So this one should be the finest one.

Prof Shamsul said Bangladesh lacks land, so it’s policy should be — construction of one quality road, instead of three/four.

“The construction of Dhaka-Mawa-Bhanga expressway has set a standard. We have no scope to backtrack from it. There is no alternative to turn all national highways into expressways to meet our demands,” he said.

Another RHD engineer said the width of the proposed Dhaka-Sylhet highway — with four main lanes plus 5.5-metre-wide lanes for slow-moving vehicles — will be same as that of an expressway and it is possible to turn the it into an expressway by investing additional money.

In case of fund constraint, Prof Shamsul said, the government should focus on the intersections first by constructing overpasses and interchanges, then it can go for widening the road. “Because, capacity and productivity of any road is dictated by the intersections,” he added.

“Expansion of a road without ensuring free flow of vehicles would be suicidal,” he told this correspondent last week.