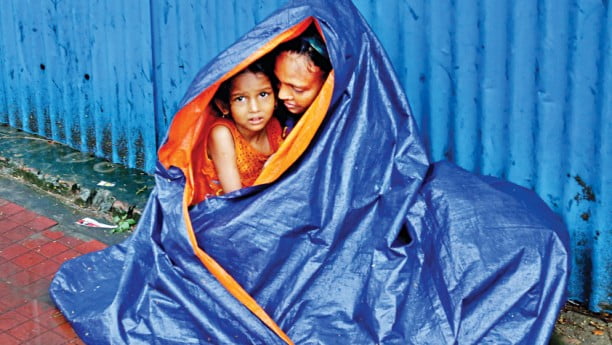 Heavy rains, induced by a depression formed in the Bay of Bengal, disrupted regular life of people across the country yesterday.

Rains started at noon and continued till evening in phases and would be continued for next 48 hours due to the depression.

“There will be rainfall across the country for at least next 48 hours,” said Shamsuddin Ahmed, director of the Met office, yesterday evening.

The depression formed in the Bay will be intensified and might cause heavy rainfall in Dhaka, Rajshahi, Khulna, Barishal, Chattogram, Mymensingh and Sylhet divisions in the next 48 hours, the Met office said.

The depression lies over north-west and adjoining west-central Bay.

According to a weather forecast published on the official website of Bangladesh Meteorological Department (BMD), warning signal no-3 was hoisted at the seaports of Chattogram, Cox’s Bazar, Mongla and Payra.

All fishing trawlers and boats were also cautioned in the northern Bay, the warning added.

The Department of Shipping has banned all small launches below 65 feet in length on inland waterways in the district since Wednesday morning.

In addition, more than 100 chars in different upazilas in Patuakhali, along with some other areas, have been inundated with 2 to 3 feet of water due to heavy rains.

At least five passengers are missing after a speedboat capsized in the Agunmukha river in Rangabali upazila of Patuakhali around 5:30pm yesterday.

There were 18 passengers on board and 13 passengers could reach the river bank by swimming, but five people are still missing.

All of a sudden, the bottom part of the speedboat collapsed and it sank in the river, he added.