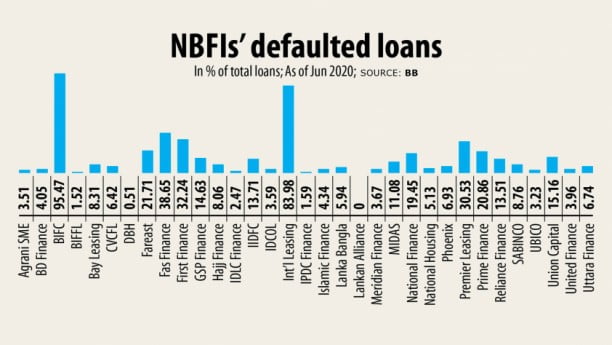 Defaulted loans at non-bank financial institutions (NBFI) escalated 26.51 per cent in the first half of 2020 because of a lack of corporate governance in absence of the central bank’s proper supervision.

Non-performing loans (NPLs) in the 33 NBFIs in Bangladesh stood at Tk 8,905.62 crore in June, which are 13.29 per cent of the outstanding loans, according to data from the central bank.

Scamsters siphoned off a large volume of funds from some of the NBFIs in the form of loans using fake documents, creating piles of defaulted loans in the sector, experts said.

Although the central bank earlier asked the NBFIs to keep classification unchanged until December, though upward classification changes are allowed, NPLs in the sector shot up alarmingly as some of them had concealed the delinquent loans through window dressing.

Window dressing is a technique used by companies and financial managers to manipulate financial statements and reports to show more favourable results.

Although window dressing is illegal or fraudulent, it is usually done to mislead investors.

Defaulted loans at the International Leasing and Financial Services (ILFS) stood at Tk 3,356.83 crore in June, up 256.47 per cent from that six months earlier.

The NBFIs are the ILFS, People’s Leasing and Financial Services (PLFS), FAS Finance and Investment, and Bangladesh Industrial Finance Company (BIFC), according to a probe of the central bank.

The central bank found that Tk 1,596 crore was transferred from the ILFS in violation of rules through 48 accounts of various organisations related to the directors and shareholders.

The central bank is now in a process to liquidate the PLFS after it failed to repay the depositors’ money.

The amount of NPLs would have been much larger had Tk 600 crore to Tk 700 crore of default loans of the fallen PLFS were added to the list, said a central bank official.

“The NBFI sector has been facing an image crisis due to a wide-range of corruption in five to seven financial organisations,” said Khondker Ibrahim Khaled, a former deputy governor of the central bank.

“PK Halder is largely responsible for the ongoing crisis. And the central bank can’t avoid its responsibility as it had kept silent when the money was being looted from the NBFIs,” he said.

Measures should be taken to bring Halder back to Bangladesh to recover the embezzled fund, Khaled said. Halder is said to have fled to Canada.

Also, both the government and the central bank should take strict measures to ensure punitive actions against the scamsters, Khaled said.

Seven of the NBFIs have even failed to manage the required provisioning against their regular and classified loans, a sign of their fragile financial health.

The central bank has recently carried out special audits into some of the NBFIs through which a large amount of defaulted loans has been unearthed, said Mominul Islam, chairman of the Bangladesh Leasing & Finance Companies Association, a forum of top executives of the NBFIs.

Probe bodies of the central bank marked the loans, embezzled by Halder, as defaulted assets, during the inspection. This fueled the NPLs in the NBFI sector in the first half, he said.

The central bank should restructure the weak NBFIs in the interest of the country’s financial sector, said Islam, also the managing director of IPDC Finance.

“The fragile NBFIs can be merged as they can’t run their operation smoothly,” he said.

If required, both the government and the central bank may think of injecting capital and liquidity into them so that they can commence operation in a new form, Islam said.

The government can also order its intelligence agencies to recover the embezzled funds, he added.

“At least 50-60 per cent assets of the misappropriated fund may be recovered within two to three years if measures are taken right now,” Islam said.