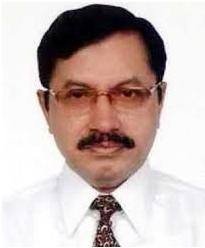 Daily Sangram Chief Reporter Ruhul Amin Gazi, also president of a faction of Bangladesh Federal Union of Journalists (BFUJ), was arrested this evening after a warrant was issued against him in a sedition case.

He was arrested from Hatirjheel area in the capital, said Harun-or-Rashid, deputy commissioner of (Tejgaon Division) Dhaka Metropolitan Police.

The colleagues of the senior journalist said he was picked up from the newspaper’s office after Maghrib prayers.

Police said the arrest came after Ruhul Amin failed to appear in a number of court hearings in the sedition case under the Digital Security Act filed against him and Daily Sangram Editor Abul Asad.  The sedition case was over a report the newspaper printed on December 12 last year headlined “Today is the sixth martyrdom anniversary of Shaheed Abdul Quader Molla.”

Immediately after the news was published, a mob vandalised the newspaper’s office for calling war criminal Quader Molla a martyr. Following this, police took Asad into safe custody.

He was later shown arrested in a case filed by a leader of the Muktijuddho Mancha.

The High Court granted bail to the Sangram editor on September 23 this year.

Quader Molla, former assistant secretary general of Jamaat-e-Islami, was hanged at the old Dhaka central jail in 2013 in a case over committing crimes against humanity during the Liberation War.