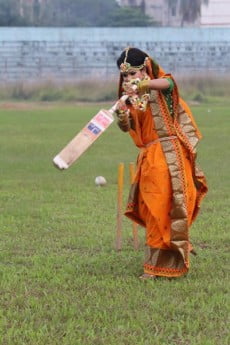 Bangladesh women’s team cricketer Sanjida Islam’s wedding photoshoot went viral on social media to the point that even the International Cricket Council’s website picked up the pictures with the caption: “Dress, Jewellery, cricket bat. Wedding photoshoots for cricketers be like …”

While the response was generally positive, some negative reactions upset Sanjida.

“Some pictures of my wedding ceremony have gone viral through mainstream media and social media. But what is there to criticise?” asked Sanjida.

Sanjidar’s husband Mim Mosaddek, also a cricketer from Rangpur who tied the knot with 23-year-old batter on October 17, is unconcerned about whatever negativity came from people who criticised the unconventional nature of a sari-clad bride playing cricket shots as part of a wedding photo shoot.

“Some pictures of Sanjida wearing a sari have gone viral.  Most people took it positively but some have taken it negatively. My response is, it is not a headache of mine and I don’t care about it,” Mosaddek told The Daily Star.

Sobhana Mostary, the youngest cricketer of the women’s national team and another junior cricketer Hasnat Cynthia — who plays for Bangladesh A — took pictures of the wedding ceremony, which were posted on social media.

“We have started a new life. We expect blessings and good wishes from everyone but some people on social media have made some bad comments which has caused some trouble on my new journey. It made me and my groom’s family upset. Relatives in my father-in-law’s house were shocked but I told them that no matter what you do, some people will always criticise you over and over. See, many have praised it too!” said Sanjida.

Mosaddek’s father is a religious man, and according to Sanjida was at first reluctant about the union because she played cricket. But after she met him and told him that religiosity and cricket are not mutually exclusive, he agreed to the marriage.

Sanjida’s mother-in-law has also played a positive role in this regard.

Mosaddek said, “My father is a very religious man. At first he objected a little bit [to her continuing to play cricket] but my mother explained to him that if I could play cricket as their son, then why not the son’s wife? My father then agreed to support Sanjida in her cricket career.”