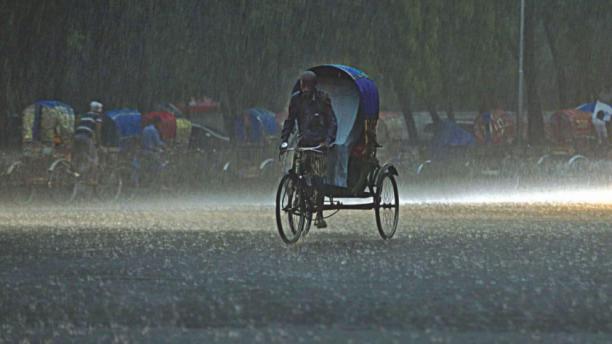 In a shift from the usual weather pattern, the country has witnessed around 50 percent more rainfall in the first nine months of this year, compared to the average rainfall in the corresponding period during the last 30 years.

This is a result of global warming and has implications for the country’s agricultural production, said experts.

According to the Bangladesh Meteorological Department (BMD), an average 363.621 millimetres of rainfall was recorded in the country between January and September.

The average rainfall recorded in the same period during the last 30 years was 246.155mm, shows Met office data.

Due to excessive rain, the country has also experienced the second longest spell of flooding this year since 1998, when the floods stayed for 63 days. This year, the duration of the floods was 61 days — from July 27 to September 30.

Experts say the massive rainfall this year was due to a warm air mass, which is a consequence of global warming.

He said the Bay of Bengal is becoming warmer than ever before.

This year, seasonal wind has lasted longer and that was why we have experienced excessive rain, he added.

The climate change expert said the pattern of seasons has been changing.

“Rain started early this year and even continued till the Bangla month of Ashwin [September],” he added.

Monowar Hossain, a BMD meteorologist, said the average rainfall recorded this year was so far the highest in terms of monthly average over the last 30 years.

“It was much wetter than normal this year,” he said.

He added that these warm air masses contribute to storms forming over tropical oceans.

Excessive rains and long-standing floods have seriously affected agricultural production, which is already visible in the rising trend of rice and vegetables prices.

Experts fear that the price of vegetables will not fall anytime soon as fresh rain across the country due to low pressure in the Bay has rubbed salt in the wound.

“As the seasons are changing, there is an impact on agriculture. If the weather changes slowly, then nature will adopt it. But due to the rapid change, agricultural production will be hampered,” said Ainun Nishat.

“The last spell of rain washed away the vegetable fields. Usually, we see winter vegetables start arriving in the market at this time. But this year, production has been hampered due to rain,” he told this correspondent late last month.

Although the government has been trying to stabilise the market price of daily essentials, the impact is yet to be visible.

The standard variety of rice is currently being sold at Tk 50-52 a kilogramme while fine varieties are sold at Tk 60-65 per kg. Vegetables are also sold at a higher price — with eggplant selling at Tk 70-80 per kg and okra at Tk 60 per kg.

Dr Abdul Muid, director general of the Department of Agricultural Extension, said they were helpless against natural disasters.

“Due to excessive rains, agricultural production has already been severely impacted. In many places, farmers who have sown vegetable seeds two to three times saw their fields washed away by rain,” he said.

Department of Agriculture Extension officials said a total of 5.82 lakh hectares of land was targeted for cultivation to produce 1.84 lakh tonnes of vegetables this year.

“We have already seen 20 percent loss of production. So, the vegetables market is less likely to be stable anytime soon,” the DG added.