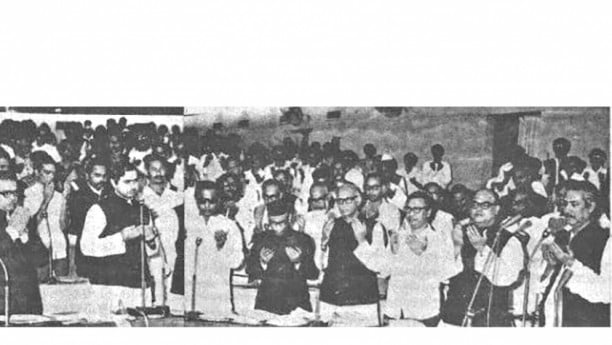 Speaking at the Gono Parishad during the third reading of the Constitution Bill today the Leader of the House Bangabandhu Sheikh Mujibur Rahman says this is the first time in history that Bangalees as a nation made a constitution to hold aloft the banner of their sovereignty. This is certainly the greatest achievement of those who spilled their blood to secure the rightful place of the Bangalee language.

Bangabandhu recounts the genesis of the protracted resistance movement that culminated in the Liberation War on March 26, 1971 and says the people of Bangladesh achieved independence through blood and tears against a very oppressive class of exploiters. And so, it is quite natural that the constitution would shape the future course of their national life and uphold the rights of the oppressed millions against a handful of oppressors.

The constitution is the sum total of the experiences gained over the years and more particularly during the Liberation War. These experiences have been summed up in the constitution as the four fundamental principles of state policy, namely nationalism, socialism, democracy and secularism.

Bangabandhu elaborately defines the principles, emphasising that the intense feeling of the people of Bangladesh to emerge as a nation lies at the core of our nationalism; the objective conditions of Bangladesh will shape the pattern of our socialist transformations; the broad masses who have suffered all through the centuries will experience supreme authority to determine their future democratically through their elected representatives; and to maintain a complete harmony they shun communal tendencies while enjoying their right to freely practice their respective religions.