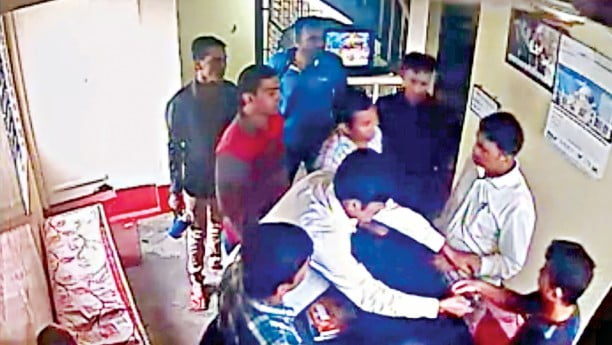 The CCTV camera of Hotel Bondhu captured it all.

Before leaving with the two, a member of the team was seen gesturing for a hotel staffer apparently to turn off the CCTV camera and it was complied with.

The previous footage, however, remained.

The two detainees, who were taken on a microbus to the DB office on Minto Road from the hotel in the capital’s Paltan, said those men were plainclothes officials from the Detective Branch.

At least 20 people at the market told The Daily Star that they witnessed the incident that day. This newspaper has also obtained and reviewed the CCTV footage.

Another camera on the ground floor of the seven-storey market, where the hotel is located, had captured moments of the two being taken away around 12:25pm.

But the first information report (FIR) prepared by the police a day after the incident, on November 7, gives a completely different story, contradicting the clips of both cameras and multiple witness accounts.

According to the FIR filed with Motijheel Police Station, officers arrested Hasan and Sohel from an alley near Fakirapool Fish Market area around 4:15pm. The duo was caught while fleeing the spot with Tk 25 lakh worth of fake notes, it mentioned.

Hasan alleged that the FIR and subsequent case had been cooked up by the DB.

“We have been framed in a false case as I refused to give Tk 3 lakh that the police officers at the DB office on Minto Road had demanded for our release,” he told The Daily Star recently.

Out on bail in April 2017, Hasan also said he was in police remand for two days before a court sent him to jail. He was behind bars for five months and 17 days.

“It was just the beginning of my long sufferings,” said Hasan, who has explored multiple avenues of justice these last four years, to little success.

Hasan and his brother Hossain Majumdar filed 10 complaints — six with the Police Headquarters, two with Dhaka Metropolitan Police (DMP), one with the Prime Minister’s Office, and one with the home ministry — at various times over the last four years.

Five probe committees — three by Police Headquarters and two by DMP — were formed to investigate the allegations against nine DB men of Motijheel Zonal Team who conducted the controversial drive.

The leader of the DB team was Jewel Rana, the then assistant commissioner of DB (East), now promoted to additional deputy commissioner.

However, till date there is no information available about what these multiple probe committees have found.

Additional SP Sharif, who headed one of the two probe committees formed by DMP, said he questioned both sides and submitted the report.

“It’s a confidential matter. I cannot comment on this; I am not authorised to do so,” he told The Daily Star recently.

DMP Cantonment’s Additional Deputy Commissioner Shahed Miah was given the task of re-investigating the same allegation in 2017.

He didn’t pick up this correspondent’s repeated phone calls or respond to text messages.

DB ADC Qazi Shafiqul Islam, who was probing the allegations filed with the DMP, also refused to make any comment.

In 2018, the DMP formed a four-member inquiry committee headed by the then DB chief Devdas Bhattacharya. The fate of the probe remains unknown as Devdas has since been transferred from DMP.

ASP Omar Faruk, who was entrusted with one of the three probe committees of Police Headquarters, said he stopped the investigation after Hasan’s brother withdrew his complaint.

Talking to The Daily Star, ASP Omar said he was given charge of the investigation at a stage when the complainant and the accused had reached a way to mutually “settle” the matter.

Hasan, however, said the brothers withdrew the complaint following verbal assurance from the accused DB officials that his name would be excluded from the final report and the charge sheet.

“But I felt betrayed when I heard that the charge sheet named me,” said Hasan.

Even worse for Hasan was that SI Dewan, one of the DB officials who conducted the controversial drive, acted as the investigating officer of the case and submitted the charge sheet to the court, accusing both Hasan and Sohel.

SI Dewan submitted the charge sheet to the trial court on September 19, 2017.

He named a total of 13 people as witnesses — nine officers who conducted the drive and four locals of Motijheel area.

Md Mintu, who claimed to be a fish trader in Fakirapool Fish Market, said, “I had told the police and the court what I had seen that day. I saw two men fleeing and the police caught them with a bag.”

Another witness named in the charge sheet, Md Raju, could not be reached as his phone number was found switched off. Mintu claimed both he and Raju signed the seizure list.

Hasan said these accounts have been made up by the police.

The probe committees formed by police called 23 shop owners and employees of the market in Paltan, who witnessed the incident that day, at various times during the investigations.

Anwar Hossain of AR Metallic is one of them.

Talking to this correspondent, he said, “We saw a group of DB men come and talk to the hotel staff. By that time, they had handcuffed Hasan bhai.

“They then instructed a hotel employee to turn off the CCTV. We asked them why they handcuffed the hotel staff and what their fault was. They rebuked us and told us to go down.”

Anwar added that Hasan and Sohel were empty-handed, not carrying anything, and that he had told all this to a police probe body.

Another witness, Md Masum of Teleplus, echoed the same.

The charge sheet submitted by the IO did not mention anything about the CCTV footage.

Asked about it, SI Dewan said he could not comment as the matter is under trial. “I checked everything. I can’t give any further comment now.”

The plaintiff of the case, Inspector Tapan, now posted with the Police Bureau of Investigation in Faridpur, declined to make any comment about the CCTV footage and referred this correspondent to the then DB team leader of the drive.

Contacted, Jewel Rana, now ADC of DB’s Ramna Division, told The Daily Star on Saturday that he preferred not to comment as the case is under trial.

He denied the allegations of the DB team demanding money for the release of the two accused, adding that he was also unaware of any “compromise” reached between the accused and his DB men.

“As far as I know, the probe body didn’t find the allegations against the DB men to be true. When the accused saw that their false pleas were not granted anywhere, they wanted to make us the victim,” he claimed.

“After my arrest, my brother almost stopped his studies as the family fell into financial hardship at the time,” he said.

Hasan said the CCTV footage is evidence that can prove his innocence and that he is a victim of police falsehood.

Advocate Abdus Salam Khan, Hasan’s lawyer, said they will seek the court’s attention and also submit the CCTV footage when it is the defence’s turn to present their arguments and witnesses.

The next hearing of the case is set to take place today.

“I have been seeking justice for the last four years and filed several complaints against the policemen in question everywhere possible. However, those officers remain unpunished,” said Hasan.

“How long should I bear the brunt of a false case?”

Sohel Rana, the chef who was picked up with Hasan, left his job at Hotel Bondhu and now lives in Chandpur.

Remembering the horror, he said, “At one point, DB officials proposed that I give a false statement against Hasan bhai in exchange for Tk 5 lakh and a job. But I refused to do so.”

Being the lone breadwinner of the family, he said it’s been a tough journey for him to meet the expenses of his family over the last four years as his mother had to sell their last piece of land.

While talking to this correspondent over the phone yesterday, he was on his way from Chandpur to Dhaka to attend today’s hearing.

Noted rights defender Nur Khan Liton said such an incident is not isolated — charge sheet manipulation, arranging fake witnesses, and changing the place of occurrence are “nothing new”.

“Unfortunately, when a victim seeks remedy from the higher authorities, it seems they don’t give importance to the allegations,” he said.

“Most of the time, the probe report of such incidents are not made public,” he observed, calling into question the role of Police Headquarters in the matter.