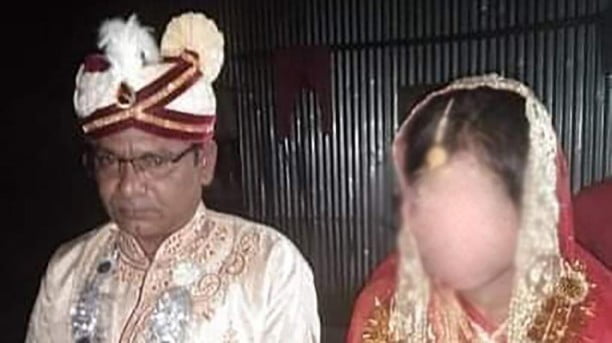 Photos of Buraburi Union Parishad chairman Abu Taleb Sarkar marrying a ninth-grader went viral on social media resulting in much discussion and criticism among locals. He married the girl, a class-nine student of Bakshiganj High School, in Kurigram’s Ulipur upazila on November 1, reports our Lalmonirhat correspondent.

The chairman has since defended his position and said, “my newly-wed wife is around 20 years old according to her PEC (Primary Education Certificate). She is still a student of Bakshiganj High School as she has been in different classes more than once.”

However, the school’s head teacher Md Meheruzzaman said the student is currently a student of class-nine and has been studying in this school from Class-6 and has not failed in any classes since.

According to local sources, UP Chairman Abu Taleb Sarkar married the girl with promises to help her family as the girl’s father is disabled.

Photos of the wedding, which were shared on social media, have been criticised and locals have questioned how a public representative ended up marrying a ninth-grader. District and Upazila administrations had also declared Buraburi union a child-marriage-free union a year ago, locals said.

Ulipur Upazila Assistant Commissioner (Land) and Acting Upazila Nirbahi Officer Ashraful Alam Rasel said he is not aware of the matter and will take action if anyone lodges a written complaint in this regard to him, he said.