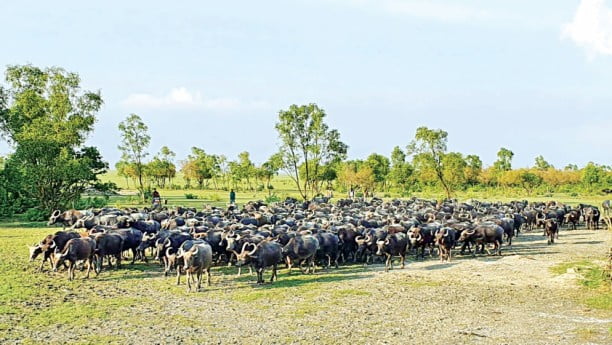 Cattle rearing is thriving as an important economic activity in Bhasan Char, an off-shore island where the government wants to relocate one lakh Rohingyas from different refugee camps in Cox’s Bazar.

Around 1,000 litres of milk is produced in the char every day and the liquid food is transported to the mainland via trawlers for sale, said some locals, who have already moved to the island.

Many rear cattle for meat.

There were a few hundred buffaloes grazing on a field while some 20 herders strolling behind the herd. It was a sunny afternoon on October 17 and this reporter, during a brief visit to the char, seized the opportunity to talk to those happily ambling men.

“We are among the first few people who started living in this island a decade ago when there was no big trees and no structure here,” said Jamir, 30, one of the herders.

He said there are around 10,000 buffaloes grazing on in the greenery of Bhasan Char now.

He arrived in that land for rearing around 100 buffaloes with a yearly wage of Tk 50,000, excluding expenses for food and accommodation.

Since then, Jamir has been rearing buffaloes in the island. He said he looks after 108 buffaloes and five of them are owned by him.

Like Jamir, there are around 100 herders in the island.

They said trawler comes to the island every day to transport people and collect milk.

Around 1,000 sheep are also reared in the island. They said two farms were doing the business there.

Mohammad Jiful, who hails from nearby Urir Char of Sandwip, rears around 100 sheep. “There are little opportunities for this in Jaijjar Char. But all the facilities are available here. The vast idle land here is a like gold,” he said.

There are two designated places for bazaars and one is already in operation, the shepherds said, adding that all the commodities are sold at fixed prices there.

While the conversation was going on, around 20 more herders, curious about this unknown face, turned up. And when they were told the purpose of the visit, one of them said: The way development work took place in the island for the last two years, we hope the island will be vibrant once Rohingyas start arriving.”

The government has built a planned modern township with rows of white multi-storey buildings equipped with electricity, water supply, common kitchens and playgrounds in Bhasan Char to accommodate some one lakh Rohingyas.

The island is located around 39km away from Noakhali in an estuary of the Meghna river. The government spent Tk 3,000 crore to build the township.

As the sun was setting on the 6,000-acre island, the shepherds prepared to head home with their herd. In the mix, some of them were uttering Shabana, Babita, Raja, Cumilla, Noakhali and so on.

When the perplexed reporter inquired, the chief came up with a funny explanation.

“These are basically the names of the buffaloes. All the buffaloes have separate names and they respond whenever they were called by those names,” said the chief with a big smile on his face.