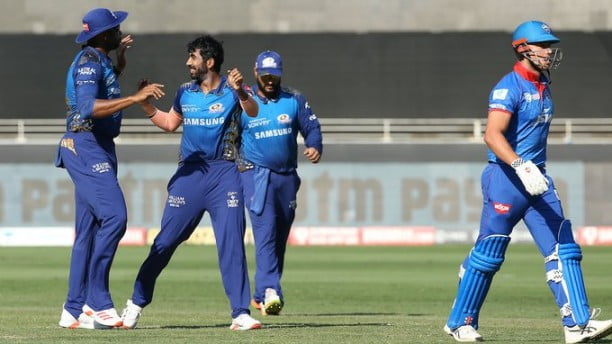 Paceman Jasprit Bumrah on Saturday moved to the top of the bowling chart in the Indian Premier League as Mumbai Indians inflicted another blow to Delhi Capitals’ dwindling campaign with a nine-wicket win.

Bumrah and fellow fast bowler Trent Boult claimed three wickets each to restrict Delhi to 110 for nine, a total table-toppers Mumbai achieved in 14.2 overs in Dubai.

Ishan Kishan smashed an unbeaten 72 off 47 balls to be named man of the match as Mumbai, who have already qualified for the play-offs, ensured a top-two finish in the league stage.

Third-placed Delhi are struggling to stay in the final four after their fourth straight loss.

“Boult was exceptional. That’s his strength, bowling with the new ball. He’s consistently given us good starts,” said Pollard.

“Bumrah, I kept delaying him, on this track with his angles. He’s jumping to bowl in the powerplays, but again I saw today getting those early wickets, and with the spinners getting grip, kept him for the middle overs.”

Bumrah, who came into bowl second change, returned figures of 3-17 to go level with Delhi quick Kagiso Rabada on 23 wickets in the Twenty20 tournament but the Indian bowler has a better average and economy rate.

Boult led the bowling charge with figures of 3-21 including the key wicket of in-form Delhi opener Shikhar Dhawan for nought off the third ball of the innings.

Delhi skipper Shreyas Iyer still hopes for the best in his team’s final league game on Monday against Royal Challengers Bangalore who play Sunrisers Hyderabad later in the evening.

“We’ll have to be fearless and keep things simple. It’s an important game for us, do-or-die depending on how they play today,” said Iyer.

“Not thinking much about the future, trying to stay in the present.”