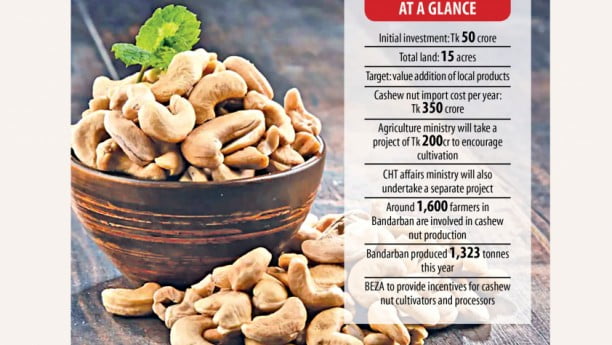 Bangladesh Steel Re-Rolling Mills (BSRM) will invest Tk 50 crore to set up a cashew nut processing plant at the Bangabandhu Sheikh Mujib Shilpa Nagar (BSMSN), a move that will boost the local economy and encourage farmers.

“Though the investment is small in size, it will leave a positive and far-reaching impact on the rural economy and supply of nutrition,” said Tapan Sengupta, deputy managing director of BSRM.

The country’s leading steel maker has already applied to the Bangladesh Economic Zones Authority (Beza) to take a 15-acre plot on lease for the processing plant.

“We will begin construction as soon as possible after signing a lease agreement with Beza,” he said.

The cashew industry is a quality investment as the impact would directly benefit local farmers and add value to the popular heart-healthy snack.

“We target to export finished products after meeting the local demand. For this reason, we will also import raw cashew nuts for processing,” Sengupta said.

This Tk 50 crore investment is just for the preliminary stage as the total investment could increase as needed in the future, he added. The BSRM’s initiative is a unique one as they want to add value to local products, said Paban Chowdhury, Beza executive chairman.

Companies have yet to tap into the potential of cashew nut processing in the country even though farmers in hilly areas cultivate the nut on a whim instead of commercial farming.

“We will provide incentives to processors and farmers to encourage both sides as it would be a good initiative,” he said, adding that investors will be encouraged to cultivate cashew nuts inside the BSMSN.

With people becoming more and more health conscious, the cashew nut cultivation has increased in line with the growing demand in local markets.

Most farmers in these areas are already growing the plant on a limited scale. However, growers in Bandarban have begun commercial farming to meet the increased demand for cashew nut.

According to the Department of Agricultural Extension (DAE) office in Bandarban, cashew nuts were cultivated on around 1,797 hectares of land this year while farming increases everyday.

AKM Najmul Haque, deputy director of the DAE’s Bandarban office, said about 1,323 tonnes of cashew nut was produced this year in Bandarban.

Now, the farmers of the district’s Ruma and Thanci upazilas are cultivating cashew nut on a massive scale as the demand is growing and seems more profitable than other fruit cultivation.

Besides, cashew nuts are not perishable and easy to carry to the market for harvesters, he said, adding that now, a total of 1,600 farmers in the district are involved in cashew nut cultivation.

Farmers are even being trained on how to increase their yields by using fertilisers and pesticides.

According to the deputy director, at least Tk 350 crore is currently being spent to import cashew nuts for local consumption.

“And since there is scope to reduce these imports to zero, cashew nut cultivation is a very promising sector for Bangladesh,” Haque said.

Haque went on to say that, considering how promising the sector is, the agriculture ministry has undertaken a project for cashew nut cultivation involving Tk 200 crore, which has already been sent to the planning commission for approval.

Besides, the Ministry of Chittagong Hill Tract Affairs is starting a separate project regarding cashew nut cultivation in three hill districts.