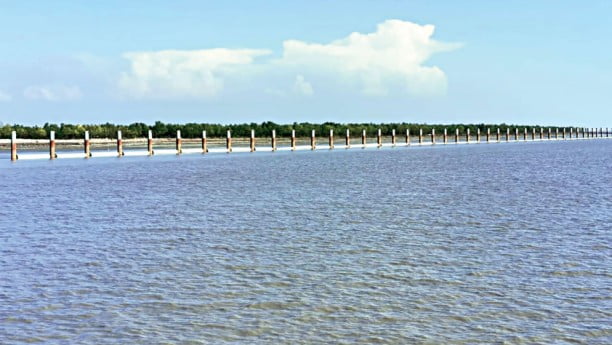 Just about the size of Cumilla town, the island of Bhasan Char in Nokhali’s Hatiya sub-district has four layers of protection from natural disasters like cyclone.

The young island emerged out of steady sedimentation in 2006 and currently boasts a spanking new modern settlement that could accommodate 100,000 Rohingyas.

Bangladesh government had spent around Tk 3,100 crore in developing the island, building infrastructure and putting in place a protection system against extreme climate events under project delegated to Bangladesh Navy.

About two hours by boat from Noakhali district town, Bhasan Char is slightly south west of Sandwip in the Bay of Bengal close to the mouth of the Meghna river.

A number of development and international organisations questioned its safety and protection from natural disasters when the Bangladesh decided to relocate Rohingyas there.

“The embankment had been constructed after studying history and data of the last 176 years,” Abdullah Al Mamun Chowdhury, project director, told The Daily Star.

The outermost rim or the first line of defence is the “Screen Break water” — a string of strong pillars along 2.5 km out in the sea to break off strong current and waves. This is followed by gravels and geo bags.

Then, there is a layer of planned mangrove plantation almost half a kilomtre deep which leads to the main 9ft-high 12-km embankment of the island.

Construction work is ongoing to raise the height of the embankment to 19 feet.

The south and northwestern side of the embankment is protected by natural mangroves.

The entire island also saw an intense mangrove afforestation initiative as a means of protection against cyclones and storm surge.

According to information provided by project officials, waves surged up to 4-5 feet high during cyclones, Foni, Bulbul and Amphan.

They point out that the embankment would thus be adequate to protect the inhabitants.

Besides, each of the 120 cyclone shelters are built on plinths at 12 feet from the ground and can hold 1,000 people with 200 heads of cattle.

The defence for Bhasan Char, according to project officials, will be adequate to protect them against extreme weather events based on the analysis of weather models of the 176 years.

Chinese construction company Sinohydro has worked on a flood-defence embankment and HR Wallingford, a British engineering and environmental hydraulics consultancy, is advising the project on “coastal stabilisation and flood protection measures”.

Mohammad Jahangir known as Fakrir told The Daily Star that there is a number of islands in Noakhali area but none is not so much protected.

“I used to live in Subarnar Char. My family is still living there. But that island was not that much protected,” Fakir, in his 50 years, said.