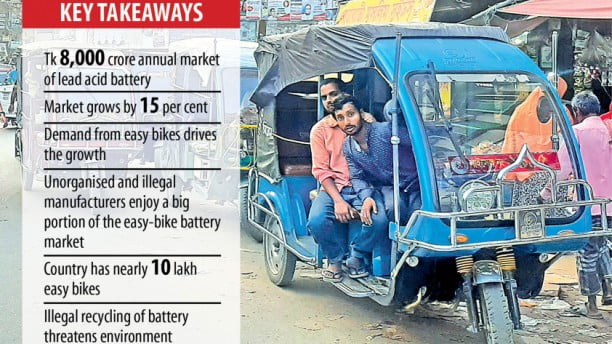 The rapid expansion of electric three-wheelers, popularly known as easy bike, has opened up huge business opportunities for battery manufacturers and traders in Bangladesh.

The annual market for batteries is Tk 8,000 crore and easy bikes consume more than 60 per cent of the market, two leading industry operators said.

Automobiles and solar home systems use the rest.

“It is huge. Battery demand has more than doubled in rural areas than metro areas. The segment has expanded in the last six to seven years,” said Munawar Misbah Moin, president of the Accumulator Battery Manufacturers and Exporters Association of Bangladesh.

The market for rechargeable lead-acid battery had been stagnant or sluggishfor years owing to the slow expansion of the use of cars and other vehicles in the country, said a senior official of one manufacturer.

The spread of electric three-wheelers, which are yet to get any formal recognition from the government and mainly run by permissions secured from local government authorities such as municipalities, has given a big push to battery manufacturers and marketers.

Run by rechargeable batteries, the easy bikes mushroomed in the last decade in district towns and rural areas because of their rising acceptance among the people of all ages.

Moin, a director of Rahimafrooz, one of the leading battery manufacturers, said there are around 10 lakh electric three-wheelers and they require nearly 25-30 lakh batteries annually.

These vehicles have created jobs for 15 lakh people and carry nearly one crore people every day.

The electric three-wheelers are replacing rickshaws as the main mode of transport in towns and rural areas. “Now, very few rickshaws could be seen,” said Md Sazedur Rahman, chief operating officer for the battery unit of Panna Group, another leadingbattery manufacturer.

He said batteries are also used in rickshaws and three-wheeler vans that used to be run manually in the past.

Because of the requirement for replacement and the increase in the number of electric vehicles, the demand for batteries will grow.

“It appears the market would double in the next five years,” said Rahman, adding that the market is growing by 15 per cent annually.

To tap the new market, existing manufacturers have expanded their production capacity.

Two more companies have made their foray into the segment in the last five years, Rahman added. Yet, organised players face competition from informal and illegally manufactured batteries.

Industry operators said unorganised and illegally manufactured batteries comprise more than half of the annual market for easy bikes.

Citing a notification issued by Bangladesh Road Transport Authority on the registration of electric vehicles this year, Moin said policy support is coming.

“That is good news. But the bad news is that the sector is still unorganised and the government should help make the sector organised,” he said, adding that a lot of illegal firms are involved in battery-making, recycling and trading.

Because of the higher demand for batteries, illegal recycling has increased. “The government has to bring the recycling under a legal framework because improper recycling is causing serious damages to soil and the environment,” the entrepreneur said.

“The sector has to be made compliant.”

Rahman also said government support is needed to help the sector grow in an organised manner.