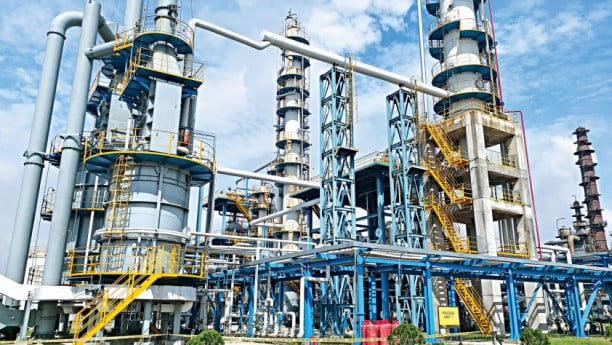 Bangladesh’s first dedicated bitumen plant established by Bashundhara Group at a cost of around $143.7 million is all set to begin commercial production at the end of this month to meet the domestic demand for asphalt.

The plant has the capacity to produce a whopping 9 lakh tonnes of bitumen a year.

However, the factory established on a 65-acre plot at Pangaon in Keraniganj will produce around 2.75 lakh tonnes in the initial phase.

“We hope to bring the product to the market in December this year,” said Nafis Imtiaz Alam, head of the plant.

The unit was scheduled to start commercial operations in April but the coronavirus outbreak delayed the process, he said.

A 13-member team from the Roads and Highways Department (RHD) led by its Additional Chief Engineer Abdullah Al Mamun visited the plant to examine its quality control measures and equipment setup on Saturday.

Currently, 90 per cent of Bangladesh’s annual demand for 5 lakh tonnes of bitumen—a hydrocarbon-based substance used to build roads and highways—is met through imports, which have questionable quality, he said.

Although imported bitumen is quality tested before being used for construction, the items fail to provide the expected result with their performance, Mamun said.

The RHD is the main consumer of locally produced bitumen.

Now, there will be no question about standards as the leading local conglomerate Bashundhara Group will likely to produce high-quality product, he added.

The prospects for the plant, which is a subsidiary of Bashundhara Oil and Gas Company, are bright given Bangladesh’s development goals.

With the major construction and repair projects for about 22,000 kilometres of roads and highways under the RHD, local demand for bitumen is on the rise.

Of the 354,000 kilometres of undeveloped roads under the Local Government Engineering Department (LGED), 105,000 kilometres have already been upgraded to paved streets.

Besides, the government is expanding all national highways from four to six lanes. This includes district level roads, for which the use of bitumen has increased by about 10 to 15 per cent annually.

With the standard requirements set by engineers given utmost priority, the premium quality Bashundhara bitumen product has penetration values of 60/70 and 80/100 and comes in various grades: cut back, emulsified, oxidised and polymer modified.

“We need modified and customised bitumen to ensure the longevity of road construction for flexible pavement,” Mamun said.

According to the additional chief engineer, the Bangladesh Petroleum Corporation can provide only 70,000 tonnes of bitumen as a by-product from Eastern Refinery Ltd.

Khandaker Kingshuk Hossain, chief marketing officer of Bashundhara Group, claimed that they will produce high-quality products to ensure the construction of sustainable roads.

He said initially they will produce around 3 lakh tonnes of bitumen per annum but it will be later increased to 9 tonnes by the end of 2021 as they plan to export the additional produce.

Hossain said the plant will create 1,000 direct and around 20,000 indirect jobs across the country.

“Our visionary strategy is not only to make Bangladesh self-sufficient in bitumen, but also open our doors to our overseas clients. We expect to export around 4 lakh tonnes of bitumen, reaching the highest production capacity,” he said.

Jiangsu Liyang Yunlong Equipment Manufacturing Co. Ltd, which has experience with establishing this type of heavy industry, implemented the plant on a turnkey basis.

In 2019, around Tk 1,721 crore was spent to import bitumen and the value has increased by about 20 per cent annually, according to Hossain.

“As Bashundhara bitumen is capable of meeting the gap, this sum of money will be added to our economy,” Hossain added.