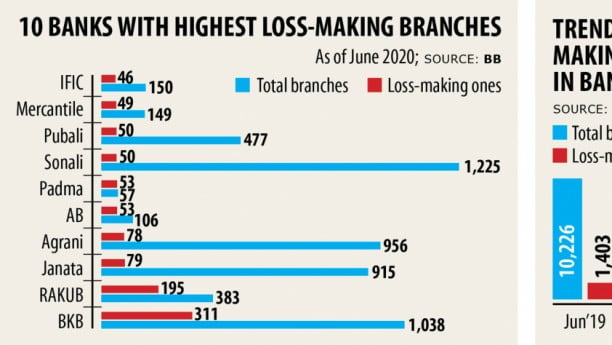 People’s reluctance to secure financial services in person amid the coronavirus pandemic and a lack of corporate governance have driven up the number of unprofitable branches of banks in Bangladesh.

The number of loss-making branches rose 36 per cent year-on-year to 1,907 in June, data from the central bank showed.

This meant the banking sector has 18.22 per cent of their brick and mortar outlets in the red, up from 12.19 per cent among 10,450 branches in December last year.

People have embraced digital banking to avoid going to branches to keep the highly infectious disease at bay, dealing a major blow to the traditional banking operation.

Although the majority of banks managed to make a profit on papers in the six months to June, the number of loss-making branches for almost all banks rose. The branches that had earlier been at a break-even became loss-making, said Mansur, also the chairman of Brac Bank.

“Banks would have to accelerate their shift from the traditional branch-led model to digital banking.”

Brac Bank has decided not to open any new branch in the days ahead as it has embraced branchless banking, he said.

Local banks are now following the path of their peers in the developed economies, where lenders began the move to digital banking more than a decade ago and their switch has received a shot in the arm during the pandemic.

For instance, Deutsche Bank, the largest lender in Germany, is planning to close one in five domestic branches as clients prefer online banking to brick and mortar outlets to avoid catching the flu, according to a recent report of the Financial Times.

This will help the lender return to profit as well. The bank has declared it would shut around 100 branches to bring down the total to 400 in Germany.

Even before the pandemic-induced business slowdown, some banks in Bangladesh had a higher number of unprofitable branches and weak financial health due to a lack of corporate governance.

For instance, Padma Bank has 53 loss-making branches out of its 57. Weighed down by financial scams, the fourth-generation bank is yet to become a profitable lender.

“As part of the move, we will close some branches and open agent banking booths in their places such that clients can avail required banking services,” he said.

Also, the lender would open new branches in the potential areas to make profits, Khasru said.

AB Bank is another beleaguered lender in terms of unprofitable branches. Half of 106 branches of the lender, which also faced financial scams in recent years, turned into loss-making.

Tarique Afzal, managing director of the private commercial lender, said a significant number of branches of the bank incurred losses in the first half of 2020 because of the business slowdown caused by the pandemic.

“The branches have improved their situation in the third quarter keeping pace with the ongoing economic recovery,” he said.

The number of loss-making branches of Pubali Bank stood at 50 among its 477 outlets.

MA Halim Chowdhury, managing director of the bank, said the lender opened 10 new branches in the last quarter of 2019 and the outlets are yet to become profitable due to the pandemic.

“Besides, six to seven district branches are incurring losses as they have to meet the expenditure of the branches under the supervision,” he said.

“At least 10 loss-making branches will start generating profits by this year,” Chowdhury said.