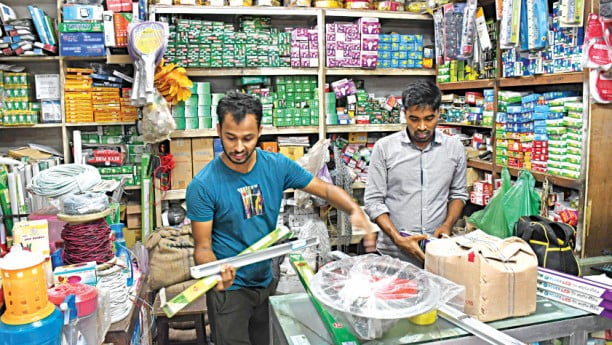 Banks and other financial institutions can now lend more to trade-based cottage, micro, small and medium enterprises (CMSMEs) as the central bank yesterday raised the annual ceiling of the loans for the sector by 10 percentage points.

While unveiling the Tk 20,000 crore stimulus package for the CMSME sector in April, the central bank included trade-based micro and cottage firms as a huge number of people are employed in the sector.

At the time, lenders were allowed to disburse 20 per cent of their total annual loans to trade-based CMSMEs.

Now, they can set aside 30 per cent of the loans for the sub-sector as the CMSMEs have been hit hard by the coronavirus pandemic, the BB said in a circular yesterday.

As a result, banks can channel up to 30 per cent of the stimulus package to the sector.

If the amount of the loans goes past 20 per cent, the share of the funds for the manufacturing and service sub-sectors would go down proportionately. However, it would not be below 70 per cent combined for the two sub-sectors, the BB said.

The disbursement of the funds from the stimulus package has not been satisfactory, the BB said.

Grassroot entrepreneurs and chambers have also requested the central bank to increase allocation for the CMSMEs reeling under the pressure of the pandemic, the BB said.

“Trading dominates the CMSME sector. So, we had long been urging the central bank to raise the ceiling for the trading sub-sector,” said Syed Abdul Monem, head of SME of Brac Bank.

Because of the 20 per cent cap, banks could not lend more to CMSME traders from the package, he said.

“So, we welcome the 10 percentage points increase. This will help banks accelerate the disbursement of funds from the stimulus package.”

He also urged the central bank to amend the definition to incorporate trade-based CMSMEs.

The definition of the central bank has not differentiated between large traders and CMSME traders and they have been put in the same group.

“These small traders and retailers sell goods made by the manufacturers. So, there is no point in depriving them of availing all facilities such as banking. The sector can be made a thrust sector by bringing changes to the definition.”

The banker also said the deadline for the CMSME fund disbursement should be extended to December, as the central bank did in case of the stimulus package for the farming sector.

Brac Bank has disbursed about Tk 500 crore as of last week from the Tk 1,100 crore target set by the central bank from the CMSME fund. It hopes to disburse another Tk 150 crore to Tk 200 crore by this month.

Banks are getting 50 per cent of the fund from the BB.

CMSMEs can take the working capital loan at 9 per cent interest. Of the interest, 4 per cent will be borne by the borrowers and 5 per cent by the government.

The CMSME sector represents 13 million business entities in Bangladesh, contributing 25 per cent to the GDP, 35.5 per cent to total employment and 80 per cent to export earnings, according to the Dhaka Chamber of Commerce and Industry.