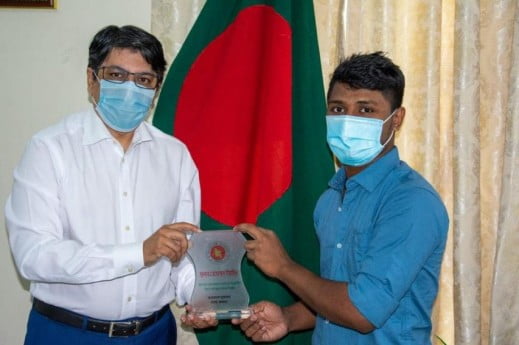 Md Yasin, a Bangladeshi migrant worker in Qatar, was felicitated by the Bangladesh Embassy in the gulf country today for his “exemplary good deed”.

Bangladesh Ambassador in Qatar Md Jashim Uddin handed over a crest to him at the embassy, says a social media post of the foreign ministry.

Recently, Yasin earned admiration by assisting a man in a wheelchair who was trying to cross a busy road. Seeing him, Yasin parked the motorcycle he was on and proceeded to help the man cross the road.

A passerby took a video of the incident and shared it on social media, where the clip went viral.

The local authority of Qatar has awarded Yasin for displaying his civic responsibility and for the humanitarian gesture, says the foreign ministry post.