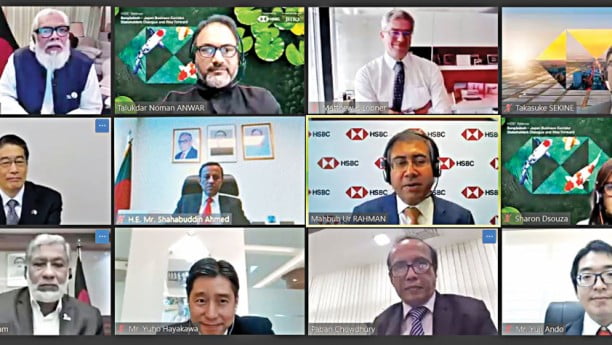 Bangladesh could be the next great investment destination for Japanese investors as special economic zones are being built in the country and companies from the island nation are keen on expanding their operations here, experts said yesterday.

They spoke at a webinar on the ‘Bangladesh-Japan business corridor: stakeholders dialogue and way forward’, organised by HSBC Bangladesh in partnership with the Japan External Trade Organisation (Jetro), the bank said in a statement.

“Japan has been one of the major destinations for Bangladeshi goods,” said Salman F Rahman, the prime minister’s private industry and investment adviser.

“Our bilateral relationship has also enhanced in other areas, especially in trade and investment. We will do our best to facilitate Japanese investment in Bangladesh,” he added.

Rahman also informed that Prime Minister Sheikh Hasina views Japan as a significant ally and is deeply committed to improving the bilateral ties between the two friendly countries.

He then lauded the HSBC for further strengthening the economic and business link between Bangladesh and Japan.

“The establishment of Araihazar Economic Zone is a $1 billion investment project, which will attract lots of Japanese investment,” said Naoki Ito, Japan’s ambassador to Bangladesh.

The zone has the potential to be the best economic zone in Asia by overcoming challenges of business environment such as tax, custom’s clearance and foreign remittance as well as giving incentives, he added.

“By leveraging our international footprint, we connect businesses to a network covering more than 90 per cent of the global GDP, trade and capital flows.”

A message from Bangladesh Bank Governor Fazle Kabir was also read out at the event.

“Japan has been a key trusted development partner of Bangladesh’s growth story and the momentum is expected to grow exponentially in coming years,” said Kabir.

“The two key sectors where Bangladesh is expected to witness significant Japanese investment are energy and infrastructure development,” he added.

A Jetro survey found that 70 per cent of the existing Japanese companies in Bangladesh are keen on expanding their operations.