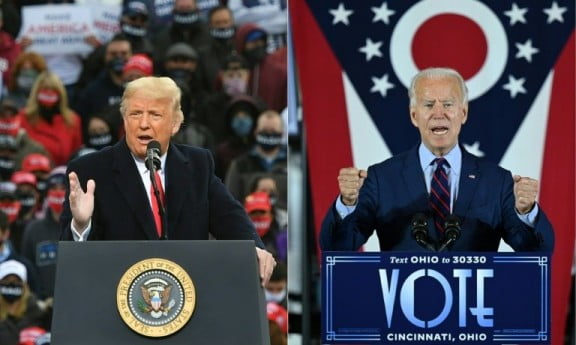 As the US awaits election day on Tuesday, misleading claims from President Donald Trump and his opponent Joe Biden are circulating on hot-button issues including the Covid-19 pandemic, the economy and healthcare.

AFP examines inaccurate claims from both candidates below.

But it was Hillary Clinton, not Biden, who used the phrase in the 1990s.

At the final presidential debate last month, Biden maintained that he did not say “super predators.” He did, however, warn of criminal “predators” when making a speech on the Senate floor to push for a 1994 crime bill.

Trump and campaign staffers have repeatedly said at rallies, town halls and during interviews that his government’s response to the novel coronavirus pandemic “saved over two million lives.”

The claim relates to a March 2020 paper from Imperial College London that explored how the virus could spread under different response levels.

The paper said that “in the (unlikely) absence of any control measures or spontaneous changes in individual behavior,” deaths could peak at 2.2 million in the United States.

As of 1100 GMT on November 1, 230,556 deaths from 9,127,109 cases had been recorded in the US. But Trump’s pandemic response did not save two million people who were expected to die; it rather avoided an unlikely worst-case scenario in which no action was taken.

Biden and his campaign team claimed in an ad that Trump called the novel coronavirus a “hoax.”

The video, posted on Twitter on September 15, 2020, shows a clip of Trump at a rally at the beginning of the pandemic at which he says “the coronavirus…and this is their new hoax.”

It then contrasts that with a recording in which the president privately called the virus a “killer.”

However, the video from a rally in North Charleston, South Carolina on February 28, 2020, was misleadingly edited.

“Now the Democrats are politicizing the coronavirus,” Trump said, before describing Democratic criticism of his response to the pandemic as “their new hoax.”

“One of my people came up to me and said, ‘Mr President, they tried to beat you on Russia, Russia, Russia.’ That didn’t work out too well. They couldn’t do it. They tried the impeachment hoax,” he said. “They tried anything, they tried it over and over… And this is their new hoax.”

“We’ve created a record 11.4 million American jobs since May,” Trump said during a speech to the New York Economic Club on October 14, 2020. The president often mentions this figure at rallies, heralding a statistical bounce that followed the reopening of the US economy.

However, he usually does not mention that 22 million jobs had previously been lost as local governments across the country imposed lockdowns to combat the spread of the coronavirus.

Many people who registered for unemployment due to business closures went back to work, as opposed to new jobs being created.

Weekly applications for jobless benefits remain higher than the worst of the 2008-2010 global financial crisis, and about 23 million people continue to receive some form of government unemployment support.

“They have 180 million people, families under what he wants to do, which will basically be socialized medicine — you won’t even have a choice — they want to terminate 180 million plans,” Trump said during the final presidential debate on October 22. He repeated the comments in an interview on CBS’s “60 minutes.”

The number refers to the 180 million Americans covered by private insurance from their employers or purchased for themselves, according to 2019 American Community Survey figures aggregated by health policy organization KFF.

However, Biden’s plan is to build on the existing Affordable Care Act, known as Obamacare, “instead of starting from scratch and getting rid of private insurance.” He wants to create a new public option for coverage like Medicare, to lower costs associated with healthcare, while keeping private options currently in place available.

Biden has warned at several rallies that Trump’s efforts to do away with the Affordable Care Act “will take protections away from pre-existing conditions for over a hundred million people.”

A 2017 report from the Department of Health estimated that up to 133 million people fell into that category. A report from health consulting firm Avalere found that 102 million individuals have a pre-existing condition and are not on Medicare or Medicaid.

However, individuals with pre-existing conditions whose health insurance is covered by their employers already have some protections under the Health Insurance Portability and Accountability Act of 1996.

In 2019, 55.4 percent of Americans were covered under their employer’s insurance, according to the Census American Community Survey, while 5.9 percent purchased private health care, according to KFF.