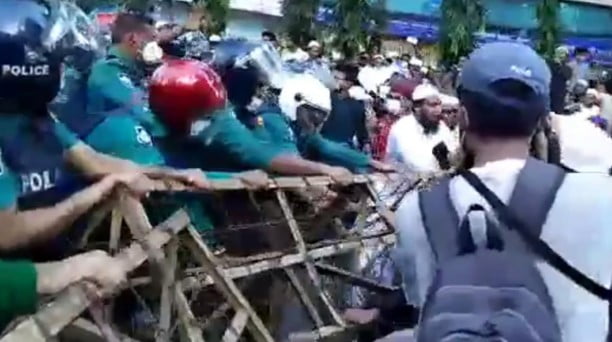 Pro-Islamic groups including students of different madrasas brought out a short procession against France, asking for boycotting products from the European country, from Baitul Mukarram National Mosque after Juma prayers today.

Activists from the group attacked police when they were barred from proceeding at Bijoynagar intersection, our staff correspondent reported from the spot.

Police put up barricades on the road at Bijoynagar intersection, barring the protesters from marching towards Kakrail.

The protesters tried to break the barricade and threw bricks, shoes and sandals targeting police.

Police, however, did not launch any counter action. Protesters shouted slogans against France and demanded that the government ban French goods.

Police have not issued any statement in this connection.