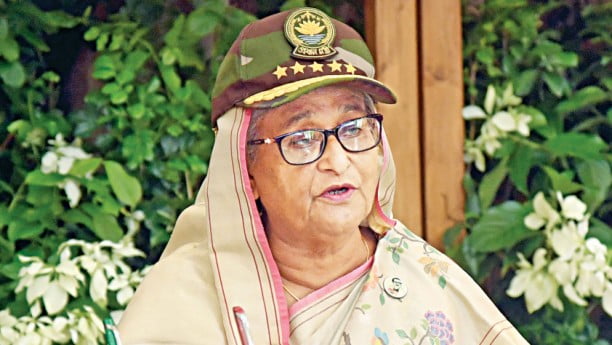 Prime Minister Sheikh Hasina yesterday asked the Bangladesh Army to be always ready to face any threat from home and abroad to protect the constitution and sovereignty of the motherland.

“For protecting the sacred constitution and sovereignty of the motherland, you have to be ever ready to face any threat from inside and outside keeping the unity intact,” she said.

The PM was addressing a programme on the occasion of raising of flags of Bangladesh Army’s eight units and organisations.

She joined the event, which took place at Sheikh Hasina Cantonment in Lebukhali of Patuakhali, virtually from the Gono Bhaban.

Hasina said Bangladesh Army is the symbol of confidence and trust and it has to step forward through gaining the trust of the people.

She said the first need for army personnel, as members of the Army, is professionalism and training.

“To attain this desired standard of professionalism, you all have to be skilled professionally, and also have to maintain honest and benignant life imbued with religious and social values.”

The premier hoped that army members would sincerely discharge their responsibilities maintaining its key driving forces, including confidence in higher leadership, mutual trust, compassion, brotherhood, dutifulness, responsibility and above all, maintaining discipline.

Hasina said the government wanted that members of the armed forces would perform their duties towards the country and its people with responsibility, dutifulness and affection to the motherland.

About the country’s foreign policy, introduced by Father of the Nation Bangabandhu Sheikh Mujibur Rahman, “Friendship to all, malice to none”, the PM said Bangladesh does not want war with anyone, rather it wants friendship with all.

“With these friendly relations, we want to develop Bangladesh socioeconomically.”

However, she firmly said the government wants to get the preparations ready for any attack on the country at any time.

“We want to be ready like that way, we want peace and friendship. We don’t want enmity and war, because we have already witnessed the destructiveness of a war. We are the victims of a war, we don’t want to engage in that type of conflict again,” the premier said.

She said the country’s economic development and prosperity are the main goals of the government and it has been working restlessly towards those goals.

The government has taken all necessary steps to develop Bangladesh Army as capable of facing geo-political and military challenges of the 21st century, the PM added.

In this regard, Hasina mentioned that the government has been implementing Forces Goal 2030 that was formulated following the defence policy of the Father of the Nation.

Praising army members for their integrity and responsibility in facing various natural disasters and humanitarian crises, she asked them to continue their efforts in future.

The PM also appreciated the army’s role in facing the Covid-19 pandemic and said members of the army are lauded for creating mass awareness about the virus.

About the national standard, Hasina said it is a matter of dignity and pride for any battalion or unit of the forces to receive the national flag.

Earlier, the PM took a salute from members of the army through a video conference from Gono Bhaban.