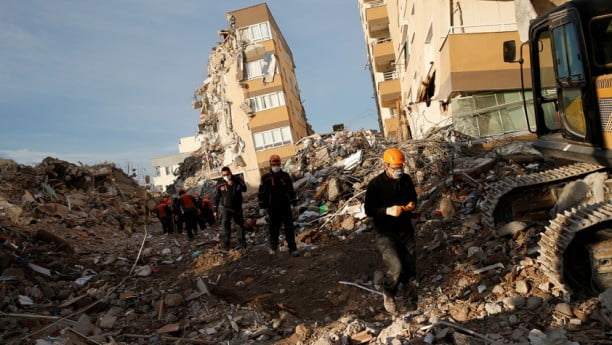 Turkey on Wednesday ended search and rescue efforts in the rubble of buildings that collapsed as a result of Friday’s strong earthquake in the Aegean Sea, after the death toll crept up to 116 in the western city of Izmir and a Greek island.

The quake, the deadliest to hit Turkey in nearly a decade, injured 1,035 people in Izmir and 137 were still being treated, Turkey’s Disaster and Emergency Management Authority (AFAD) said.

It said search and rescue efforts at 17 damaged or collapsed buildings had been completed and teams were clearing the rubble.

In addition to the 114 people killed in Turkey, two victims of the tremor were teenagers on the Greek island of Samos, authorities said.

On Tuesday, 90 hours after the quake struck, rescuers in Izmir pulled a young girl alive out of the rubble.

More than 2,790 tents were set up for temporary shelter and more than 10,222 beds were distributed in the area, AFAD said.

It said 22 boats had sunk and 43 others had run aground, of which 40 had been rescued, as a result of the quake.

Turkey is crossed by fault lines and is prone to earthquakes. More than 500 people were killed in a 2011 quake in the eastern city of Van, while another in January this year killed 41 people in the eastern province of Elazig.

AFAD said Friday’s earthquake had a magnitude of 6.6, with 1,855 aftershocks. The US Geological Survey put the magnitude at 7.0 and the Kandilli Observatory in Istanbul said it was 6.9.